US and NATO send tanks to fight Russia

This week, the United Kingdom and Poland announced that they intend to send main battle tanks to fight Russia in Ukraine, opening the way for Germany and the United States to make similar announcements. For the first time since Operation Barbarossa 80 years ago, German-made tanks will cross the Polish border to take part in a shooting war against Russia. This is, without a doubt, the most reckless and escalatory measure taken by the US and NATO to date. 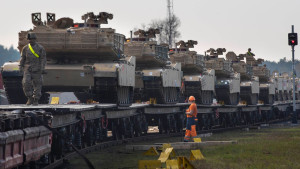 Abrams battle tanks stand on rail cars in Lithuania, near the Russian border, in 2019. [AP Photo]

Tanks are offensive, not defensive, weapons. They are used to break through enemy entrenchments, with the aim of capturing territory.

Ukrainian officials have made clear that Western tanks are key to the achievement of their goals in the war, including the reconquest of the Crimean Peninsula held by Russia since 2014. The United States is training hundreds of Ukrainian forces in armored warfare at its base in Bavaria, Germany,  carrying out exercises with NATO armored vehicles. The tanks and their crews will leave Germany and enter Ukraine through Poland, where they will be thrown against the Russian front.

Modern tanks need vast logistics networks to arm and support them. A single M1 Abrams tank consumes 60 gallons of fuel per hour when deployed. These tanks will require a massive train of logistics personnel, many of them likely to come from the armed forces of NATO countries.

Not only the tanks, but their vast logistics and supply trains, will become targets. Each Leopard 2 tank costs approximately £15 million. The protection of these weapons systems, not to mention the troops that will service and supply them, will become a vital military necessity for NATO.

The US and NATO have staked their credibility on the outcome of the war, which is evermore explicitly defined as the military defeat and dismemberment of Russia. The logic of the conflict requires, therefore, an ever greater esacalation. With its armored columns and supply lines threatened by Russian weapons and airpower, either inside Ukraine or over the Polish border, the creation of a “no-fly zone” will again be mooted in the American press as a vital necessity to protect the commitment that has already been made.

This would mean that, in the name of defending its military assets, US and NATO pilots and SAM operators would be engaged in shooting down Russian warplanes, kicking off a direct shooting war between the US and NATO.

This is the prospect the American and European population is being signed up for, without their knowledge, by governments that promised to avoid “World War III” and nuclear “Armageddon.” In an expression of the reckless and provocative character of NATO’s actions, the New York Times wrote, “Over the last few weeks, one barrier after another has fallen,” as “the United States and its allies take on more risk to defend Ukraine.” In a lead editorial advocating sending main battle tanks to Ukraine, The Economist wrote: “Another worry is that, if Russia is pushed too far or too fast, its president, Vladimir Putin, could escalate and, in the worst case, even trigger a nuclear war.

These are not baseless fears.” The Economist argues for sending tanks despite the danger. “If Mr. Putin concludes that his nuclear threats won him this victory, it would set a terrible precedent.” It adds, “Yielding to Mr Putin’s nuclear threats today sets up more perilous stand-offs tomorrow.”

The imperialist war planners assume that they can intensify their engagement in the war without a Russian response. But if Washington isn’t afraid of the consequences of nuclear war, what makes them believe the Kremlin won’t be? In fact, this argument applies with greater force to the Russian side than to NATO, because it is the Russian government, and not Washington or Berlin, that is confronted with the prospect of regime change.

If The Economist editorial board were on the Russian side, what would they be saying? “If NATO concludes that military escalation won it a victory, it would set a terrible precedent.” After all, “yielding to NATO’s escalation today sets up more perilous stand-offs tomorrow.” This, in other words, is an argument for Russia to respond to NATO’s escalation by launching an attack on NATO or a nuclear attack on Ukrainian forces. The more the US and NATO escalate, the less reason for Russia to avoid escalating.

During the Cold War, virtually the entire US political establishment, with the exception of the “lunatic fringe” of the Republican Party, accepted the doctrine of “mutually assured destruction.” This doctrine held that certain actions were impermissible for the United States, because the risk of provoking a nuclear response from the Soviet Union was an unacceptable threat.

Now, the mantra in every major newspaper is that NATO and the United States cannot be “deterred” from carrying out policies that could lead to nuclear war. It is like saying that one should not be “deterred” from jumping out of a building by the thought of hitting the ground. Washington’s entire strategy is irrational, like all plans for world conquest in the past.

But this irrational policy is driven by social and economic interests. The more the present global conflict develops, the clearer the fact that this war, like the first two world wars of the 20th century, can be understood not by who fired the first shot but by much deeper social causes. The reactionary Russian invasion of Ukraine was provoked with the aim of instigating a conflict that would lead to the dismemberment of Russia.

Beyond naked geopolictical interests, the American ruling class confronts an array of economic, social, and political crises for which it has no solution. It believes that, through a desperate gambit to conquer Russia, it can somehow stave off the crisis gripping American social and political life. And even as it escalates the war in Europe, the United States is turning the Pacific Ocean into a tinderbox, supporting the rearmament of Japan and the arming of Taiwan in preparation for a conflict with China.

The plans for this global conflagration are being hatched behind the backs of the working class of the United States and the entire world. The US and NATO powers are lying about their intentions and hiding the consequences of their actions. This conspiracy extends to every major political party in the United States and Europe, all of whom have lined up behind the war effort. None of them is saying clearly what the consequences will be and how many millions of lives they are prepared to sacrifice.

The rapid escalation of the war in the first two weeks of the new year confirms the warnings made by the International Youth and Students for Social Equality in its December 10 rally, “For a Mass Movement of Youth and Students to Stop the War in Ukraine!”  In his concluding remarks to the rally, WSWS International Editorial Board Chairman David North explained: “The outcome of this process, unless stopped by the working class, will be a global cataclysm on a scale that dwarfs the violence of the past. Since the outbreak of the war, the potential use of nuclear weapons has been normalized in political discourse.”

The situation cannot be left in the hands of the capitalist ruling elites and their political parties.

Sign up for the WSWS email newsletterRelated TopicsFind out more about these topics: