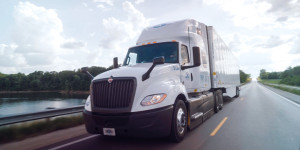 The 28th edition of the Transportation Statistics Annual Report, which is prepared and submitted each year to Congress and the President, highlights the dominance of trucking in the freight markets, including the top 10 commodity markets. Trucks transported 12 billion tons in 2019, or 67% of total domestic freight volume –about 10 times more than that of rail, the United States’ third-ranked mode by freight volume.

In 2020, the U.S. freight transportation system moved more than 19 billion tons of freight worth about £18.0 trillion through capital assets valued at about £7 trillion consisting of ports, highways, rail systems, airports, and pipelines. Trucking by far was the most relied on freight transport mode. In that year:

Trucking was the leading transport mode for all distances in 2020 by value, even for distances greater than 2,000 miles 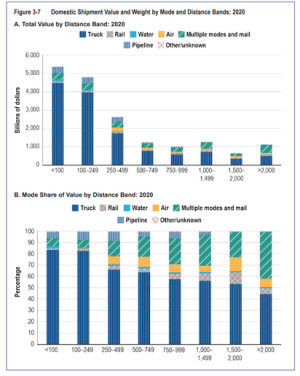 Trucks carry the largest shares by value, tons, and ton-miles of all goods shipped in the United States. Graph: BTS 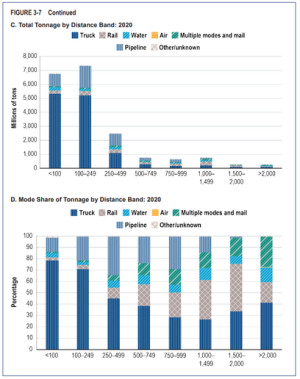 Trucking was the leading transport mode for all distances in 2020 by value, even for distances greater than 2,000 miles Graph:

In U.S. trade with Mexico, trucking is the dominant mode in 2020, carrying 35% of freight weight. Substantial foreign direct investment in Mexico in 2022, particularly from the nearshoring of U.S. companies, will likely mean an increase in cross border trade flows, with trucking continuing its modal dominance, the report explains. This will likely mean a shifting of freight flows from U.S. coastal ports to the U.S.-Mexico border.

Laredo, Texas, and Detroit, Michigan, were the third and eighth largest U.S. gateways in terms of freight value in 2020, with trucks representing 22% and 36% of total freight trade in Canada and Mexico, respectively. In 2020, Texas’s border crossings alone had about 4.4 million inbound trucks.

Improved U.S. East Coast connectivity to liner shipping networks have enabled the diversion of some Asian trade volumes from the U.S.

West Coast Asian freight volumes. A shift of Asian container trades to East Coast ports encouraged a shift from intermodal rail transport to truck transport because distances from the East Coast are shorter to mid-west markets. Consequently, the average dwell time at major terminals increased for all major terminals for the eastern railroads while that for the western railroads did not increase as much or even decreased, reflecting the relative changes in the congestion level at the rail terminals in different locations.

The Transportation Statistics Annual Report is prepared by the U.S.