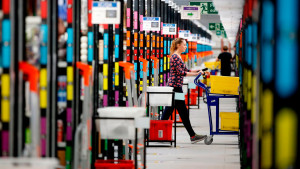 Amazon is closing three UK warehouses this year, a move that will affect 1,200 staff, as the internet retailing giant cuts costs following a squeeze in consumer spending. The closures at fulfilment centres in Hemel Hempstead in Hertfordshire, Doncaster in South Yorkshire, and Gourock in Scotland were announced on Tuesday, a week after the tech group said it would cut more than 18,000 staff from its corporate workforce, largely from its ecommerce and human resources divisions. Chief executive Andy Jassy said last week that job cuts were part of plans to weather “uncertain and difficult” economic conditions.

Amazon hired large numbers of staff during the pandemic to meet increased demand from locked-down consumers, but has been forced into a retrenchment by a squeeze in consumer spending caused by high inflation. Amazon’s share price fell almost 50 per cent over 2022. Workers affected by the UK warehouse closures will be offered alternative roles in nearby Amazon sites or retraining opportunities.

It is expected many workers will lose their jobs at the company, particularly with 300 workers in Gourock located far from any alternative sites. The company said it also planned to open two new fulfilment centres in Peddimore, in the West Midlands, and Stockton-on-Tees, in County Durham, creating 2,500 jobs over the next three years. It added that closures of Amazon sites come as a part of regular evaluations of its network.

“All employees affected by site closure consultations will be offered the opportunity to transfer to other facilities, and we remain committed to our customers, employees and communities across the UK,” the company added. Amazon warehouses have often become among the largest employer of towns across the UK, meaning that closures risk devastating local economies. The closure of the Gourock distribution centre in a part of Scotland with high unemployment, depopulation and economic decline was “devastating”, said Neil Bibby, a Scottish Labour MSP for West Scotland, who called on the devolved government in Edinburgh to disclose whether the US tech group had received government funding.

“We know Amazon has benefited from significant public funds in the past and [it] is disappointing they have decided to up and leave a community which has served them so well,” Bibby said.  The Scottish government said the decision was disappointing and that the state business agency Scottish Enterprise was “in active discussion with the company to better understand the issues”. Steve Garelick, a GMB Union organiser described the company’s move as “a real kick in the teeth for Amazon staff who worked themselves into the ground during the festive rush”.

He added: “Hard-up Amazon workers can’t suddenly be expected to up sticks and move to a different fulfilment centre which may be many miles away.” Before Christmas, Amazon cut several thousand roles in its Devices and Books business, including teams behind its Alexa voice assistant and Kindle ereader. It has also delayed by up to six months the start dates for some university graduates due to join the company in May, blaming the “macroeconomic environment”.

Other tech groups, including Snap and Meta, have also sought to reduce costs by cutting jobs in recent months, while Twitter eliminated large numbers of UK jobs as part of a shake-up of the company under new owner Elon Musk.

US software company Salesforce followed suit on Wednesday last week, announcing plans to axe 10 per cent of its almost 80,000 workforce.