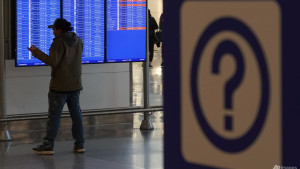 WASHINGTON/CHICAGO: The US aviation sector was struggling to return to normal on Wednesday (Jan 11) following a nationwide ground stop imposed by the Federal Aviation Administration (FAA) over a computer issue that forced a 90-minute halt to all US departing flights. Almost 9,400 flights have been delayed so far and over 1,300 canceled, according to FlightAware, in the first national grounding of flights in about two decades. Many industry officials compared the grounding to what occurred after the terror attacks on Sept 11, 2001.

The total number of flights disrupted topped 10,700 and was still rising but airline officials expressed confidence that normal operations could largely return by Thursday. Major carriers like Southwest Airlines Co, United Airlines, Delta Air Lines and American Airlines all reported 40% or more of flights Wednesday delayed or canceled. FAA officials told congressional aides they believe the outage was tied to a corrupt digital file that affected both the main system and its backup, said people familiar with the review, who asked not to be identified.

FAA officials previously said they had found no evidence of a cyberattack. Earlier, Transportation Secretary Pete Buttigieg said on CNN the FAA was looking for “the original source of the errors or corrupted files.” The White House said President Joe Biden still had confidence in Buttigieg.

Buttigieg told CNN the ground stop was the “right call” to make sure messages were getting sent correctly and there was no direct evidence of cyberattack. Buttigieg told reporters a backup system went into effect on Tuesday but questions were raised about the system’s performance, which led to a complete reboot of the system and then prompted the FAA to issue the ground stop around 7.30am EST. It was lifted just before 9am EST.

An FAA advisory said the system that provides so-called Notices to Air Missions with safety messages for pilots and others failed around 3.30pm EST on Tuesday, which meant no new messages could be processed. The outage occurred at a typically slow time after the holiday travel season, but demand remains strong as travel continues to recover to near pre-pandemic levels. It could impact traffic through Friday, said Captain Chris Torres, vice president of the Allied Pilots Association.

“This thing was lifted at 9am Eastern. That doesn’t mean the problem stops at 9am This is going to cause ripple effects,” said Torres, whose members fly for American Airlines. One issue airlines are facing is trying to get planes in and out of crowded gates, which is causing further delays.

Crews’ time-limit rules may also be a factor. At an airport in Greenville, South Carolina, Justin Kennedy abandoned a work trip to nearby Charlotte, North Carolina. He described confusion as airline employees and many passengers were initially unaware of the FAA’s moves and flight delays.

“I sat in a Chick-fil-A dining area that had a good view of the TSA exit,” the 30-year-old information technology employee said. “I saw at least four people sprinting to gates because they thought they were going to miss their flight, only to come back to the food court, out of breath.”

US airline customers have few alternatives. Driving distances are too great, and the country’s passenger rail network is thin compared with those in other countries. The US Travel Association, which represents the travel industry including airlines, called the FAA system failure “catastrophic.”

Shares of US carriers rebounded after the market opened as flights resumed. The S&P 500 airlines index closed up 0.9 per cent. An operational meltdown at Southwest at the end of last year stranded thousands.

The DOT, FAA’s parent agency, criticized Southwest’s failures and pressured the airline to compensate passengers. Buttigieg on Wednesday rejected the suggestion the FAA should reimburse travelers for delays caused by the outage. The FAA suffered another significant computer issue on Jan 2 that led to significant delays in Florida flights.

Package delivery companies FedEx, United Parcel Service and DHL, which rely heavily on planes, said they faced minimal disruptions on Wednesday. Separately on Wednesday afternoon, air traffic control manager NAV Canada reported an outage of about 90 minutes in a similar messaging system used in Canada, but said the issue had not caused any flight delays. The agency said it did not believe its outage was related to the FAA one, but was investigating.

Ria Malhotra, a 29-year-old resident physician from Weehawken, New Jersey, had been scheduled to fly from Newark to Las Vegas for a medical conference, but her flight was first delayed and then rescheduled.

After this, she wonders how much she will fly.

“I just don’t want to deal with this process anymore because I feel like flight delays are more the norm than they are the exception to the rule,” she said.