OTTAWA, ON, May 14, 2021 /CNW/ – The Canadian Owners and Pilots Association (COPA) – the largest aviation association in Canada – introduces new membership options to include the growing drone community.
Drones are profoundly changing the world of avia…

Based on the historical situation of the past five years (2016-2020),GLOBAL INFO RESEARCH analyzes the overall scale of global Truck Loading Conveyor in the past few years, the scale of major regions, the scale and share of major enterprises,… 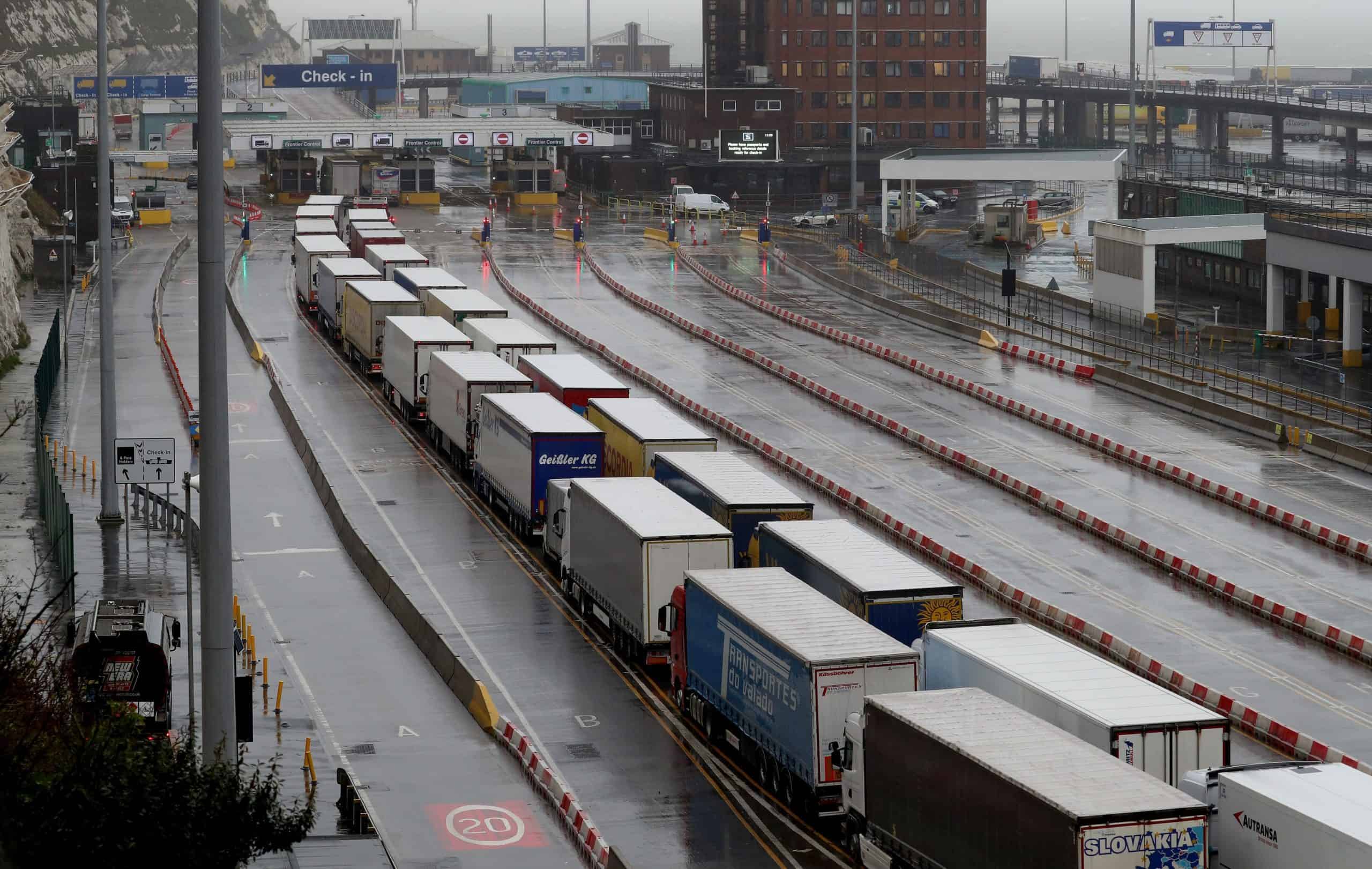 A lorry firm boss has resorted to drastic measures after Brexit led to a shortage of drivers in his area.

Adam Giles, company director of truck driver agency BWN Driver Management Group, had two scantily clad women posing next to a roundabout in Felixstowe, Suffolk on Friday, as part of a recruitment drive.

The women are seen holding placards with the ad ‘drivers wanted’ and the contact details and company logo emblazoned on them.

This happened in #Felixstowe yesterday
BWN Driver Management thought it appropriate to use scantily clad women to advertise HGV driver jobs. Here are their contact details should you wish to complain #misogyny #Sexism #EverydaySexism pic.twitter.com/bmB7BUDwYe[1][2][3][4][5]

The stunt has attracted widespread criticism with people calling it “sexist for objectifying women”, but Giles says he had no other choice.

He said: “I’m a small company. we haven’t got much money to throw at advertisement. I’ve taken a bit of a tongue in cheek stunt. It’s a bit of fun.

“I didn’t expect many people to talk about it. I’m not trying to change the truck driving industry or be sexist about this. What I’ve done, people can form their own opinion.

“The marketing campaign has been so good I’m fully booked for test drives today, I was fully booked over the weekend. It’s achieved the desired effect.

“There’s a very serious situation in the UK. The way the rules have changed about foreign nationals coming into the UK, guys are leaving in floods. It’s so difficult to employ lorry drivers.”

Since you are here

Since you are here, we wanted to ask for your help.

Journalism in Britain is under threat. The government is becoming increasingly authoritarian and our media is run by a handful of billionaires, most of whom reside overseas and all of them have strong political allegiances and financial motivations.

Our mission is to hold the powerful to account. It is vital that free media is allowed to exist to expose hypocrisy, corruption, wrongdoing and abuse of power. But we can’t do it without you.

If you can afford to contribute a small donation to the site it will help us to continue our work in the best interests of the public. We only ask you to donate what you can afford, with an option to cancel your subscription at any point.

The TLE shop is also now open, with all profits going to supporting our work.

The shop can be found here[9].

A truck firm boss has denied he is sexist after he hired “scantily-clad” women to hold up job ads on the side of the road.

Imogen Dangerfield was ‘horrified’ after seeing two glamour girls posing next to the side of the road.

The women held placards up with ‘drivers wanted’ and truck driver agency’s contact details and company logo emblazoned on them.

One is wearing a skin-tight bodysuit and the other sports a thin boob tube, tight skirt and thigh-high socks.

Adam Giles was pictured with the “scantily-clad” women displaying the recruitment notices.

Mum-of-one Imogen Dangerfield quickly launched into a social media tirade to brand the firm “sexist” for objectifying women’ and called on others to contact them and complain.

She said: “It’s completely inappropriate. This implies that all HGV drivers are interested in girls with their t**s out.

She said: “They’re dressed like sex workers. I’m not dissing sex workers. They’re selling sex, but this is about drivers. When I saw it I was horrified. I just thought ‘what the hell’.

But company director Adam Giles defended the stunt saying claiming it wasn’t intended to be sexist.

The image was shot during a photoshoot aimed at reversing recruitment struggles has faced since Brexit[1] made it more difficult for foreign nationals to remain in the UK.

He has since hailed his marketing stunt as a ‘huge success’ already, claiming his test drives are now fully booked.

But other haulage bosses waded branded Adam’s choice of job ad as ’embarrassing’ and ‘pathetic’.

Imogen’s post triggered debate on Facebook[2] where one user asked if she’d ‘moved to the 1970s’, yet others praised it as a ‘marketing win’ and ‘ballsy but genius’.

Haulage company director Adam Giles said: “I’m a small company. we haven’t got much money to throw at advertisement. I’ve taken a bit of a tongue in cheek stunt. It’s a bit of fun.

“I didn’t expect many people to talk about it. I’m not trying to change the truck driving industry or be sexist about this. What I’ve done, people can form their own opinion.

“The marketing campaign has been so good I’m fully booked for test drives today, I was fully booked over the weekend. It’s achieved the desired effect.

“There’s a very serious situation in the UK. The way the rules have changed about foreign nationals coming into the UK, guys are leaving in floods. It’s so difficult to employ lorry drivers.”

Gary Austin, training and development manager at container transport firm Maritime Transport Ltd, said: “This is shocking and out of order. The industry is working hard to encourage diversity and a haulage boss does this!”

But Mr Giles defended the stunt, he said: “I’ve got 50-100 drivers and companies who have contacted me with their story and said they’re so glad you’ve been ballsy and gone with a different approach.

“It was a photoshoot and we’ve got some great pictures, but this one picture was just taken by a truck driver driving around the roundabout.”

U.K. Trade Claws Its Way Back From Big Brexit Slump

After Britain’s split from the European Union to start the year, things are looking up for post-Brexit U.K. trade. But only barely.

The latest official data show goods exports to the EU rebounded 8.6% in March from a month earlier, while imports from the bloc rose 4.5%.

trade tracker[1]. They underscore how January’s dismal performance — when goods moving in both directions suffered a steep drop — was written off as more of an initial shock than a preview of the divorcees’ future trading relationship.

the rebound[2] always seems better after a big letdown. “January was a massive train wreck,” as U.K. Trade Policy Observatory director Michael Gasiorek put it. “This is still pretty grim.”

The numbers were somewhat skewed by a boost from exports of cars, which rose 36.2% compared with a year earlier.

Gasiorek explained this may be because car manufacturers were “more able to think about rejigging their supply chains” than other suppliers.

Exports of live animals, meat and dairy products, for example, which face the burden of

March was a hectic month in trade news, not least because of turmoil ranging from Covid-19 to the container ship wedged across the Suez Canal.

To isolate the Brexit effect, it helps to compare the U.K.’s trade with the EU to that with the

rest of the world[4]: The first quarter was the first since records began in 1997 that non-EU imports outpaced those from the bloc.

This worries Thomas Sampson, associate professor at the London School of Economics. He said overall, the data suggest that “a lot of the bounce-back has now happened and we seem to have stagnated at a substantially lower level than we were pre-January.”

Manufacturers in China have been absorbing some of the rising costs of things like paint, screws, metal and packaging for months, providing a buffer for global inflation. But as Bloomberg’s Enda Curran writes[6], some are now starting to pass on their rising input costs to overseas customers.

On the Bloomberg Terminal

Don’t keep it to yourself. Colleagues and friends can sign up here[18]. We also publish Balance of Power[19], a daily briefing on the latest in global politics.

How are we doing? We want to hear what you think about this newsletter. Let our trade tsar know[22].

— With assistance by Demetrios Pogkas

Here’s what you need to know:Stocks on Wall Street dropped for the third consecutive day on Wednesday as new data on consumer prices added to investors’ concerns that inflation could upend the Federal Reserve’s efforts to keep interest rates low to bol…

A standard PAS 29000 (publicly available specification) on mitigating security risks of lorries has been published by the British Standards Institution (BSI[1]) and sponsored by the Department for Transport[2] and the UK official Centre for the Protection of National Infrastructure (CPNI[3]).

The 24-page PAS, ‘Framework for mitigating security risks from malicious use’, is free to download from the British Standards website[4].

Nick Fleming, Head of Mobility and Transport Standards at BSI, said: “This new standard, developed with operators of commercial vehicles, encourages good practice in the managing of security risks that may help to reduce the threat of vehicles being used in acts that may cause intentional harm to the public or for organised crime. The standard highlights the growing importance of physical vehicle security measures to help prevent such criminal acts taking place.”

The spec does make the point that theft of cargo from lorries, or vehicles being used for drugs trafficking, are ‘malicious uses’ that happen more often than ‘vehicle as a weapon’ terror. Hence the document goes through ‘organisational measures’, starting with a risk assessment and like other Standards, based on policies and processes. Mitigation may include ‘robust pre-employment checks for all employees’, a briefing for new staff on ‘the required security culture’, and ‘a means for staff to report security concerns’. As for physical security, the PAS suggests among other things pre-booking of all visitors and a requirement for wearing a pass while on site. The document goes on to the vehicles, such as checking – especially when a lorry has been left parked – for anything planted or stowed on board. Also proposed is a security breach and incident management plan; and a review at least every 12 months.

The DfT says that it’s working with industry on accreditation and certification schemes for commercial vehicle firms to meet the PAS.