Canada’s mandate for commercial vehicles to use electronic logging devices (ELDs) took effect on Saturday. But it’s missing two key pieces: meaningful enforcement and a list of approved ELDs certified for use in the country.
The result is a peculiar se…

BRAZEN thieves made off with around 150 e-scooters worth £100,000 from a shop in an overnight raid – after cutting through a unit wall.

Stunned staff at Scoot-A-Boot in Loanhead, Midlothian, discovered the huge heist when they turned up for work yesterday morning.

It is believed the theft specifically happened between midnight and around 2am.

The approximate value of the stolen goods is £100,000 – with up to 150 e-scooters feared to have been nabbed from the upstairs storage room.

At least three different models were stolen, including the Xiaomi pro 2, black with red rim, black SAB tech 9 pro, and the MS65 replicas, in both black and white.

Due to the volume of stolen items detectives believe those involved used a van or lorry to carry out the theft.

The crooks cut through the side of Scoot-A-Boot’s unit in the town near Edinburgh late last night, before making off with the adult scooters.

They managed to avoid the CCTV within the store, but staff are hoping footage from the street could help nail them.

Owner Rory Boyd said: “They’ve cut through the side of the unit.

“We’re tying to check CCTV. They’ve managed to avoid ours because the scooters were taken from another level.

“They were in storage up on the top level and they’ve managed to get up without actually setting foot on the ground floor of the store.

“So we’re trying to check the CCTV from out on the street.

“Someone came in between 6am and 7am this morning and thought there had just been an attempted break-in, but we later realised the scooters were gone.”

The raid was reported to cops yesterday morning after staff made the discovery, and officers have launched a probe

Detective Constable John Lumsden from Dalkeith Police Station, said: “Initial enquiries have been carried out into this theft and we continue to review CCTV from the premises and those nearby.

“I’d ask anyone with private or business CCTV covering the area to check their footage and provide any to us as soon as possible.

“Despite this happening overnight, I’d ask anyone who may have seen any suspicious vehicles in our around the premises in the early hours of Friday morning to report any sightings to officers.

“Due to the number of stolen goods it is likely that the suspects had to load these into a van or lorry over a period of time.

“I’d ask anyone who has recently been offered an e-scooter, or seen new advertisements online for selling sites matching the above description, to report this to officers so that we can investigate.”

THE long-time leader of a Gaelic choir has told of his delight after being recognised with a British Empire Medal (BEM) in the Queen’s Birthday Honours.

Kenneth Thomson, from Kelvinside, has spent nearly 40 years of his life conducting the Glasgow Gaelic Musical Association (GGMA) after first taking up the hobby by accident – and he hasn’t looked back since.

The former chief executive of Yorkhill’s NHS Trust was asked by a dad of a friend of his girlfriend – and later wife – Valerie at the age of 18 to cover on his native Campbeltown’s choir for just six weeks, only for Mr Thomson to fall in love with the language.

But the 71-year-old has admitted the award is tinged with sadness as he is unable to share it with Valerie, who lost her life when she was struck by a lorry on Kelvinbridge 11 years ago.

Kenneth and his wife Valerie, who passed away 11 years ago

The father-of-two and grandfather-of-four said: “I only felt sorry that my wife was killed in an accident a few years ago and she wasn’t here to share it with me.

“But I know she would have been really proud.”

He added: “I am feeling quite delighted and it was such a nice surprise to get the email.

“It was actually kind of by accident that I became involved in the choir.

READ MORE: Glasgow’s Lulu has plenty to shout about after being given a CBE in Queen’s Birthday Honours[1]

“I was originally from Campbeltown and my then girlfriend, and later wife, and I were visiting a friend of hers, whose father happened to be president of the local choir.

“He mentioned they were short of singers and asked me to come along just for six weeks. I didn’t know any Gaelic at the time but I went along and six weeks turned out to be 50 odd years.

“My wife was a native Gaelic speaker but I learned in a crash course at Glasgow University.”

As well as spending 32 years in the health[2] service, Mr Thomson has received widespread recognition for his dedication to Gaelic singing.

As a solo singer in the 1970s, he won the Silver Pendant at the East Kilbride Mod and then went on to win the Gold Medal in Stornoway.

He later spent time as the conductor of East Kilbride Gaelic Choir and has recorded several albums.

In addition to conducting and singing, he has been a prolific arranger of Gaelic songs for choral singing, initially for the GGMA and latterly for other choirs, quartets and duos.

Mr Thomson has also organised many events in the past to raise money for health-related projects, and was previously inducted into the Scottish Traditional Music[3] Hall of Fame.

“It’s been a big part of my life,” he said. “The past year plus has been frustrating but we are hoping to begin again soon.”

Kestrel chick rescued after lorry knocks it out of nest

This adorable kestrel chick was rescued in West Yorkshire after being knocked out of its nest.

The chick, which has been taken to Meltham[1] Wildlife Rescue, was found grounded and unable to fly after being knocked out of its nest by a lorry.

With no sign of mum or dad nearby, rescuers made the decision to take the little chick to wildlife rehabbers who will look after it until it is ready to be re-released into the wild.

PC Caroline Newsome from West Yorkshire Police[2]‘s wildlife crime unit, who took the chick to Metlham Wildlife Rescue, told Yorkshire Live: “The kestrel’s nest had been disturbed/damaged when a wagon has caught a power cable, attached to an old building, exactly where the nest was situated.

To get the latest email updates from Yorkshire Live, click here[3].

“The kestrel chick will stay at Meltham for a week, monitoring its health and feeding – he/she gulped down half a chick last night, so has a good appetite! – before heading up to Knoxwood wildlife rescue, where they have bigger aviary facilities.”

PC Newsome said that the plan will be to keep the kestrel ‘wild’ in captivity until it is ready to be released, which will probably be in the autumn.

With the bird nesting season upon us, PC Newsome has urged anyone who finds a chick in this situation to consult with a rescue centre before intervening – unless there is an obvious danger.

There is also more information about what to do if you find an injured bird on the RSPB website[4].

Download the YorkshireLive app[5] to customise the news that matters to you and get the latest updates first.

When will the heatwave end? The exact date temperatures will start to drop – and thunderstorms arrive[6] 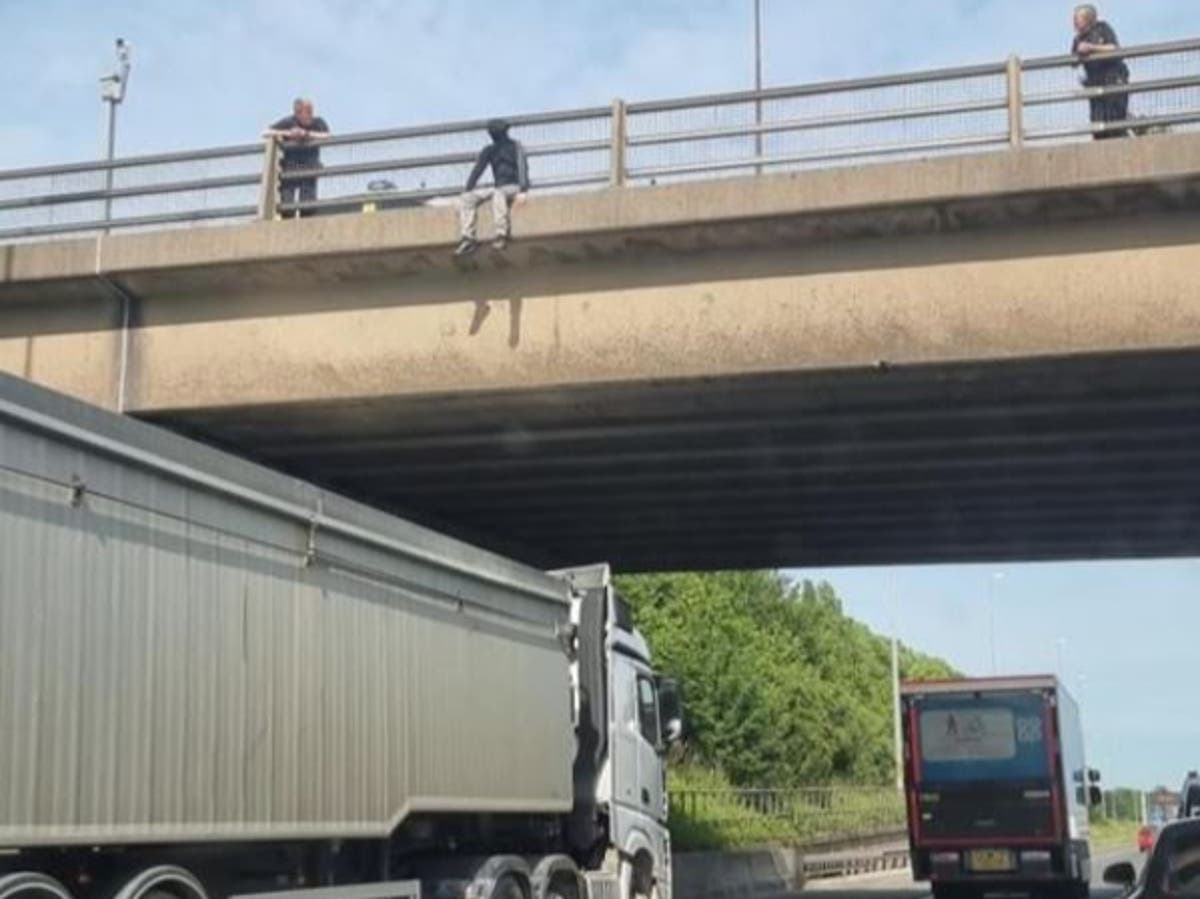 A lorry driver has been praised after parking beneath a motorway bridge[1] which it was feared a man would jump off.

A photograph shared on social media show a man sat on the edge of a bridge flanked by what appears to be two police officers.

Cheshire Police said it was called to a bridge over the M62[2] by Warrington[3] on Tuesday afternoon due to safety concerns.

Vulnerable Citizen Support Leeds, a community interest company providing welfare services for those in need, shared a photograph of the incident on their Facebook page to raise awareness of mental health issues.

The non-profit organisation said it was sharing the image to show “it’s okay not be ok”.

The group, who also deliver food to the homeless, praised the lorry driver for taking action.

“What a trucker,” the post said. “Stopping on the hard shoulder and leaving his truck there – to ensure when he did jump it wasn’t a longer distance to the floor.”

It added: “What people don’t understand is that to jump on the other side of any bridge – indicates something drastically wrong with [their] mental health. But whats next?”

Social media users were united in praise for the lorry driver, with one user commenting: “Trucker is a good human and deserves the utmost respect.”

Another wrote: “God bless the trucker and I hope and pray the man who was suicidal gets the help he needs and deserves.”

Highways England confirmed to The Independent that the M62 was closed at Junction 9 by Warrington on Tuesday due to a police incident.

A Cheshire Police spokesperson told Sky News reports of safety concerns for a man on an M62 bridge by Warrington came through on Tuesday afternoon.

She said: “A full closure was put in place while officers and specialist negotiators attended to the scene to engage with the man who was brought to safety and handed into the care of paramedics.”

If you are experiencing feelings of distress and isolation, or are struggling to cope, The Samaritans offers support; you can speak to someone for free over the phone, in confidence, on 116 123 (UK and ROI), email [email protected], or visit the Samaritans website to find details of your nearest branch.

Canada truck attack: ‘They were the best among us’

On Saturday, London, Ontario’s Muslim community will lay to rest four members of a family killed in what police say was a racially motivated attack. Here’s what we know about the family.
© Courtsey Saboor Khan (From left to right) Yumna Afzaal, Madiha…

Canada truck attack: Loved ones describe family as ‘the best among us’

(From left to right) Yumna Afzaal, Madiha Salman, Salman’s mother, and Salman Afzaal, were “the best” of their community, friends saidOn Saturday, London, Ontario’s Muslim community will lay to rest four members of a family killed in what police say wa…

Police have shut part of a major road in Brampton[1] this afternoon.

There is currently heavy traffic on the A6195 Dearne Valley Parkway after a lorry came off the road between Broomhill roundabout and Wath Road roundabout.

It was first thought that the road had been shut due to a “police incident”.

To get the latest email updates from South Yorkshire Live, click here[2] .

Our traffic partner, Inrix, is reporting the road has been closed since around 12.30pm.

Inrix said: “A6195 Dearne Valley Parkway in both directions closed, heavy traffic due to accident, a lorry involved between A635 Doncaster Road (Cathill Roundabout) and A633 Wath Road Roundabout.

“Ongoing since around 12:30, where a lorry has come off the road close to the Broomhill Roundabout. Was first reported to be a police incident.”

South Yorkshire Live has contacted police for comment and we will bring you the latest developments in our live blog below.

Are you at the scene or stuck in traffic? Send your pictures to [email protected]