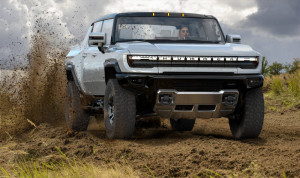 As the popularity of electric vehicles grows, safety leaders are concerned that road injuries could increase due to how much heavier battery-powered cars are over their gas-guzzling predecessors. In a keynote address Wednesday at the Transportation Research Board’s 2023 annual meeting, National Transportation Safety Board chair Jennifer Homendy expressed concern over the increasing curb weights of EVs, citing a few prime examples, like the GMC Hummer EV, which she said weighs over 9,000 pounds (4,082kg). That’s up from 6,000 pounds for the gas version, Homendy said. “The battery pack alone weighs over 2,900 pounds – about the weight of a Honda Civic,” she added.

Additionally, Homendy said the Ford F-150 Lightning “is between 2,000 and 3,000 pounds heavier than the non-electric version. The Mustang Mach-E, Volvo XC40 EV, and RAV4 EV are all roughly 33 percent heavier.” While Homendy agrees that something has to be done to address greenhouse gas emissions from the transportation sector, “we have to be careful that we aren’t also creating unintended consequences: more death on our roads.”

Not an undue fear

Traffic fatality data for the whole of 2022 hasn’t been released yet, but in 2021 the National Highway Traffic Safety Administration said road fatalities rose at a record pace in the first nine months of the year.

“The projection is the highest number of fatalities during the first nine months of any year since 2006 and the highest percentage increase during the first nine months in the Fatality Analysis Reporting System’s history,” the NHTSA said.  Overall, 2021 saw a 10.5 percent increase in traffic deaths to reach 42,915 – the most killed on US roads since 2005.  According to the Environmental Protection Agency, the average vehicle weight has reached an all-time record and is predicted to continue rising in the coming years.

Vehicle weights dropped considerably in the 1980s compared to highs measured in 1975, but since then the average car and truck has increased from 3,200lbs to 4,200lbs. That’s an average increase of 1,000 pounds, which the National Bureau of Economic Research said in 2011 was enough to increase accident fatality risk by 1,000 percent.  The larger and heavier the vehicle, the greater the risk, and EVs are getting heavier still – that Hummer with the added weight of a Honda Civic is nearly three times over that 1,000 figure from the study.

EVs are so heavy that the Insurance Institute for Highway Safety, which performs a lot of crash tests, was worried its equipment wouldn’t be able to bear the weight of the Ford F-150 Lightning, given it’s 3,000lbs heavier than the gas-powered model.

To determine whether their crash test system could get up to speed what Raul Arbelaez, vehicle research center VP, called “heavier than anything we’ve ever tested”, technicians had to resort to loading an old F-150 with concrete blocks. “We were able to get it up to 40 miles per hour and hold that speed – it worked,” Arbelaez said in a YouTube video. That’s all well and good, but EVs are still too heavy for existing infrastructure in US cities and on highways and have already started to cause chaos in some urban areas like Indianapolis, Indiana, where a new electric bus rapid transit line was added in 2019, and where weight is already ruining roads.

IndyGo, which manages Indianapolis’s bus system, said last year that it and the local public works department agreed that the concrete work done in 2019 “was sufficient” to handle the weight of the buses, but that turned out not to be the case, necessitating lane closure and repairs last summer.  There are also concerns that EVs will be too heavy for some bridges, which has prompted automotive companies and car haulers to lobby US lawmakers to lift hauler weight limits by 10 percent, allowing car haulers an extra 8,000lbs on top of their 80,000lb weight limits. That allowance, said the American Trucking Association, would mean a car hauler could carry the same number of F-150 lightnings as internal combustion F-150s.

Unsurprisingly, safety experts have opposed the move citing both wear and tear on roads and bridges and the increased safety risks of heavier vehicles. According to Homendy, EVs aren’t the only thing getting heavier. Gas-powered cars are gaining weight too, and it’s all concerning enough for some legislative attention.

“We’re fighting for the 43,000 people who die annually on our roads and the millions more who are injured,” Homendy said. “Safety, especially when it comes to new transportation policies and new technologies, cannot be overlooked. Ever.” (R)