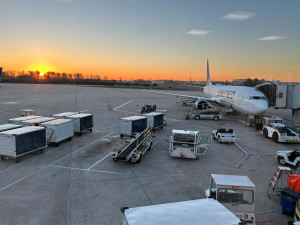 A plane sits at a gate at the Orlando International Airport on Wednesday. (Lou Mongello via Reuters)

The national system that experienced an outage, Notice to Air Missions — delaying departing flights across the US — is a notice essential to pilots and flight personnel, according to the Federal Aviation Administration.

“A Notice to Air Missions alerts pilots about closed runways, equipment outages, and other potential hazards along a flight route or at a location that could affect the flight,” according to the FAA.

Commercial airline pilots use the NOTAM system for real-time information on flight hazards and restrictions. The FAA stipulates the NOTAM system is not to be relied on as a sole source of information, and so some flights may be able to satisfy safety requirements by using other data.

It is separate from the air traffic control system that keeps planes a safe distance from each other, but it’s another critical tool for air safety.

“It’s like telling a trucker that a road is closed up ahead. It’s critical information,” said Mike Boyd, aviation consultant at Boyd Group International.

Although many flights take place without needing to see one of those notices, it’s important that NOTAM messages reach the pilots, who are trained to check for them.

The acronym previously was called Notice to Airmen, but it was changed in December 2021 to be “inclusive of all aviators and missions” and to send notices to drone operators as well.

The computer systems that are the backbone of ATC system have also been known to go down.

But when that happens, it typically only affects one region of country, not the entire nation’s air space.