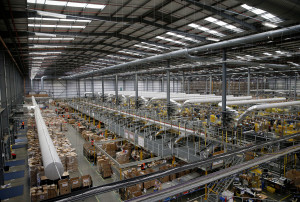 Workers work inside an Amazon.co.uk fulfillment centre in Hemel Hempstead, north of London, on November 25, 2015. The company has announced it will be closing the site.Adrian Dennis | Afp | Getty Images

LONDON — Amazon confirmed Tuesday that it has launched a consultation to close three U.K. warehouses, where it employs a combined 1,200 people. The company may shut down the sites at Hemel Hempstead, Doncaster and Gourock as part of an evaluation of its network “to make sure it fits our business needs and to improve the experience of our employees and customers,” a spokesperson told CNBC.

They said that all workers would be offering new roles elsewhere. It did not specify the location of the opportunities planned for the 300 staff at Gourock in western Scotland. “All employees affected by site closure consultations will be offered the opportunity to transfer to other facilities, and we remain committed to our customers, employees, and communities across the UK,” the spokesperson said.

The company plans to open two new fulfilment centers in the U.K. over the next three years, in Peddimore and Stockton-on-Tees, adding 2,500 jobs. The Amazon spokesperson added that the U.K. site closures were not part of the 18,000 job cuts that the company announced last week. Amazon, which employs a total 75,000 people in the U.K., is attempting to scale back some of the expansion it undertook during the Covid-19 period and brace for a widely-forecast economic downturn in 2023.

The company has lost around 46% of its value on the U.S. Nasdaq over the last year, amid a wider sell-off in tech stocks. Steve Garelick of the union GMB said the proposal was a “kick in the teeth” for staff, following the busy holiday period. “Hard-up Amazon workers can’t suddenly be expected to up sticks and move to a different fulfilment centre which may be many miles away,” he said, accusing the firm of failing to provide a stable employment model.