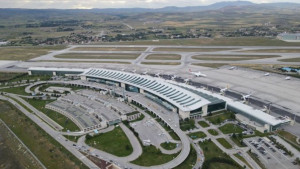 Minister of Transport and Infrastructure Adil Karaismailoglu stated that the number of passengers served at the airports in 2022 increased by 42.1 percent compared to the previous year and reached 182 million 334 thousand. Explaining that the aircraft traffic increased to 28.4 million 1 thousand with an increase of 883 percent in the same period, Karaismailoglu pointed out that they hosted a total of 95 million 256 thousand passengers at Istanbul Airports last year.

Adil Karaismailoglu, Minister of Transport and Infrastructure, announced the end of 2022 aircraft, passenger and freight traffic data. Karaismailoglu, who stated that the total air traffic increased by 18.6 percent in December with the overpasses and reached 144 thousand 578, underlined that the domestic passenger traffic was 6 million 19 thousand and the international passenger traffic was 6 million 854 thousand in the last month of the year.

Karaismailoglu announced that the total number of passengers, including transit passengers, increased by 26,7 percent and exceeded 12 million 883 thousand. Karaismailoglu said, “The aircraft traffic that landed and took off from Istanbul Airport in December reached 8 thousand 684, 28 thousand 752 on domestic lines and 37 thousand 436 on international lines. The airport of records is in Istanbul; We have served a total of 1 million 119 thousand passengers, 4 million 303 thousand on domestic flights and 5 million 422 thousand on international lines.

In the same period, airport freight (cargo, mail and baggage) traffic; It has exceeded 774 million in total, including 112 thousand 3 tons on domestic lines and 230 million 4 thousand tons on international lines.

WE HOST 605 PASSENGERS AT NEW AIRPORTS

Minister of Transport and Infrastructure Karaismailoglu stated that a total of 14 thousand 2022 aircraft traffic was realized at Rize-Artvin Airport, which was put into service on 3 May 725, and 524 thousand 694 passengers were hosted. He stated that there was 25 thousand 2022 passenger traffic.

OUR INVESTMENTS WILL CONTINUE IN 2023

Pointing out that they have implemented many investments in the aviation sector, including Rize-Artvin and Tokat New Airport, Minister of Transport and Infrastructure Karaismailoglu stated that the annual passenger capacity of Amasya Merzifon Airport has been increased to over 700 thousand passengers with the new terminal building.

Noting that the investments made are also reflected in the number of passengers, Karaismailoglu emphasized that the capacity increase works have started at Antalya Airport, for which the tender was held. Reminding that the Esenboga Airport capacity increase tender was also held in December, Karaismailoglu stated that the highest bid in the tender was 560 million 500 thousand Euros including VAT, and the 118-year rental price of 750 million 25 thousand Euros would be paid in cash within 90 days. Underlining that investments in the aviation sector will continue without slowing down, as in every mode of transportation in 2023, Karaismailoglu said, “We will continue to serve our citizens in all areas of transportation in the Turkish Century.

We are taking firm steps towards our country’s 2023, 2053 and 2071 targets with the support of our nation, on this road we set out with the love of serving our nation.”