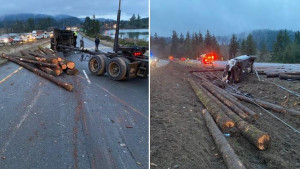 OLYMPIA, Wash. – A crash involving a log truck that spilled its load and multiple other vehicles forced the closure of US 101 west of Olympia early Friday. According to the Washington State Patrol (WSP), the crash was fully blocking both directions of US 101 shortly after 7:00 a.m.

? The Washington State Department of Transportation (WSDOT) set up detours on SR 101 northbound at Evergreen and southbound at Mud Bay. Both lanes of eastbound SR 8 were also closed.

Officials asked drivers to delay their travels if possible. WSDOT said if you are coming from Grays Harbor County, you can use either US 13 or SR 108 as alternate routes depending on where you are going. Click here for our live traffic map.

This is a developing story.

Check back for updates.