Transport Secretary says he will not negotiate with rail union boss

The Transport Secretary has said he will not negotiate with a rail union chief when the pair meet ahead of a fresh round of strikes set to cripple services over the coming months. Mark Harper said it was up to the unions and employers to address their long-running dispute over pay, jobs and conditions, as he urged both parties to "hammer out" reforms to deliver a better service. But Mick Lynch, general secretary of the Rail, Maritime and Transport union (RMT), who is set to meet Mr Harper on Thursday, said the Cabinet minister has a "direct say" over what the companies in question can offer his members.

He accused the Government of blocking a deal over the weekend, claiming the "most senior" people in his industry told him they were forbidden from making an offer. "The only people above these chief executives, the chief executives of the train operating companies, is Mark Harper," he told ITV's Peston. 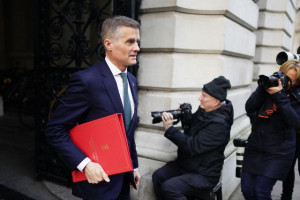 "Now he may not personally (have) done it, but he's got very senior officials in the DfT who will be at this meeting tomorrow. "I'll be questioning him about that and what his role is, if he says 'those days are gone, and I'm going to be a facilitator, a person of good will, good offices or whatever you want to call it', great.

Let's get on with it." Mr Harper insisted he has "no interest" in blocking an offer, telling Peston he wants to "help facilitate the unions and employers getting round the table to hammer out agreement on reform". "It's reform that generates the savings that can then be used to help fund pay rises for employees," he said.

Mr Lynch said the Transport Secretary is "very welcome to come round the table". It comes as Royal Mail workers, university lecturers and teachers will go on strike on Thursday, with industrial unrest continuing to spread across the UK in disputes over pay, jobs and conditions. Earlier, Mr Harper told Sky News' The Take with Sophy Ridge that he was not going to get into "throwing accusations" around, as he said he hoped for a "sensible conversation" with the RMT on Thursday.

Story continues He said he would not negotiate with the union, adding: "That's very clearly for the trade unions and the employers - Network Rail and the train operating companies. "But I do think in this case it's important to meet with the unions.

These strikes are not just about pay, this is about long-running talks that are actually about delivering rail reform." Mr Harper said he would urge Mr Lynch to call off the strikes and "get back round the table with the employers" to "try to hammer out some of those reforms". The RMT has announced a series of 48-hour strikes in December and January by its members at Network Rail and 14 train companies - and an overtime ban over Christmas and the New Year, which threatens travel chaos over the festive period.

Picket lines will be mounted outside postal delivery and sorting offices, universities and schools as unions edge closer to co-ordinated industrial action. Jo Grady, head of the University and College Union (UCU), which will see 70,000 members strike on Thursday and Friday, and again on November 30, said staff are "burnt out" but "fighting back". "They have had enough of falling pay, pension cuts and gig economy working conditions - all whilst vice-chancellors enjoy lottery win salaries and live it up in their grace and favour mansions," she said.

Members of the Communication Workers Union (CWU) at the Royal Mail will also strike on Thursday and on Black Friday, one of the busiest days of the year for delivery companies.

"We urge every member of the public to stand with their postie, and back them like never before," he said.