NEW photos have shown the vast scale of a huge new warehouse being built. Motorists driving along the M62 will have noticed the massive structure taking shape. The enormous warehouse is the newest addition to Omega Business Park, with discount retailer Home Bargains set to move in once work is complete.

As can be seen, framework has shot up, with workers progressing with plans to install grey cladding. READ > Plans in for 'employment units' on industrial site During the planning stage, it was said that the scheme will bring more than 1,000 jobs.

Two more warehouses will also follow on the stretch of land as part of a three-phase development by Miller Developments at Omega West, with land straddling Bold and Great Sankey in Warrington. 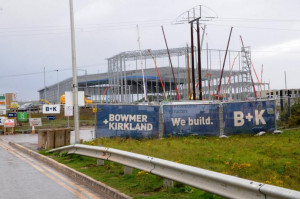 Ground preparation started earlier this year on unit one, which is to be occupied by the Merseyside-based firm. Home Bargains, which has more than 570 stores across the UK, boasts an annual turnover of more than GBP3billion. David Milloy, managing director of Miller Developments, said: "Omega has already brought significant benefits to Warrington since we first broke ground 10 years ago.

Plans state: "The proposed signage is required to advertise the occupier and assist with the operation of the distribution centre currently under construction."