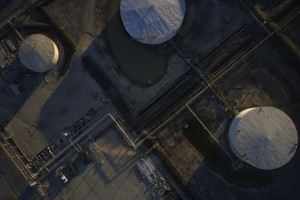 (Bloomberg) -- Oil steadied as traders awaited further details of a plan to cap Russian crude prices and assessed the outlook for demand in Covid-hit China. Most Read from Bloomberg West Texas Intermediate traded near £81 a barrel, after gaining more than 1% the previous session as equities and other commodities also gained.

European Union ambassadors may meet later Wednesday to approve the plan after officials watered down a related package of sanctions. Russia has said that it won't sell crude to nations that use the cap, which is designed to punish Moscow for its invasion of Ukraine while keeping the nation's oil flowing. "It is looking as though it will be set not too far away from levels that Russia is currently receiving," said Warren Patterson, head of commodities strategy at ING Groep NV. "If this is the case, I wouldn't expect too much of a reaction from the market.

I think it's more important to see how Russia reacts." Crude prices have trended lower this month amid concern that demand in China, the world's largest importer, will be hurt as the country presses on with Covid Zero curbs. Supplies from the Organization of Petroleum Exporting Countries and allies have also been in focus, with members rejecting speculation that they may agree to increase output at their December meeting.

"Oil has benefited from the broader rally in risk assets, while further OPEC+ members denying reports of a supply increase has provided some comfort," said Patterson. "However, demand risks continue to linger, particularly with the Covid situation in China." China's infections rose to just under a record high, jeopardizing energy demand. Although officials are now taking a more targeted approach, a growing web of curbs means 48 cities are subject to some form of district-level or widespread movement restriction, according to Nomura Holdings Inc.

Story continues The industry-funded American Petroleum Institute, meanwhile, reported US inventories shrank 4.8 million barrels last week, according to people familiar with the figures. That included a drop at the key storage hub in Cushing, Oklahoma.

Government figures on supply and demand follow later Wednesday. Key market time spreads have been volatile in recent sessions. WTI's prompt spread -- the difference between its two nearest contracts -- flipped into a bearish contango pattern on Friday and Monday.

It was last at 21 cents a barrel in backwardation, the opposite bullish configuration. Investors will also be looking to the release of the minutes of the Federal Open Market Committee's November meeting to glean clues on the pace of further interest rate rises. Tightening monetary policy has raised concerns of an economic slowdown, which is eating into energy demand.