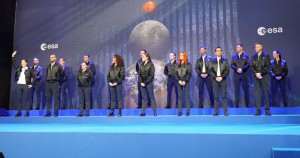 The European Space Agency (ESA) has announced a new astronaut representing the UK. Rosemary Coogan has been selected by the ESA as the UK's third-ever astronaut following a rigorous selection process and investment from the UK Space Agency. The announcement was made following the conclusion of the ESA Council of Ministers meeting in Paris where the UK Space Agency committed GBP1.84 billion of funding which will go towards new missions and programmes.

Ms Coogan will follow in the footsteps of two former British astronauts - Tim Peake, the first British recruit to go through the ESA astronaut programme in 2009, and Helen Sharman, the first Western European and British person to visit the Mir space station in 1991. Read more: Dad with 'heart of gold' killed in horror crash was 'intoxicated' and likely speeding, inquest hears Minister for Space at the Department of Business, Energy & Industrial Strategy, George Freeman, said: "Tim Peake's Principia mission showed us all how space has the power to inspire millions across the country, showcasing the UK's role as a space science superpower.

Today's announcement of the next set of UK ESA astronauts is a sign of international respect for both UK space scientists and the UK's commitment to space for all. "Just as sport is the ultimate test ground of human endeavour on land, space represents the ultimate testbed for science and technology. Just as London 2012 Paralympic Games changed the global profile of Paralympics, so space is the ultimate environment to show our commitment to the values of shared endeavour for the good of humanity and the planet.

"I congratulate Rosemary, John and Meganne on their remarkable achievement and look forward to them inspiring a new generation." Rosemary Coogan, alongside her fellow astronauts, unveiled today, will report to ESA's European Astronaut Centre in Cologne, Germany, to begin basic training activities in 2023, which will last approximately a year and a half. They will also go through intensive training sessions and mission-specific training which could take up to two years once they've been assigned a mission.

Chief Executive of the UK Space Agency, Dr Paul Bate, said: "This is a momentous day for the UK Space Agency, our space sector and the country as a whole. Through our investment in the European Space Agency, the UK is playing a leading role in space exploration and collaborating with international partners to use the unique vantage point of space to benefit life on Earth. "Space has an incredible power to inspire and I am sure Rosemary, John and Meganne will become heroes for many young people and inspire them to shoot for the stars.

It's also important to remember that, behind every astronaut, there is a dedicated team of people, including in the UK, working behind the scenes to achieve the incredible."