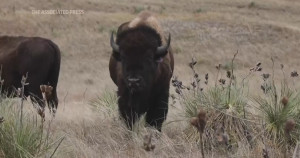 (AP) -- From South Dakota and Oklahoma to Alaska and Alberta, Indigenous groups in the U.S. and Canada are leading efforts to restore bison across North America. This comes more than a century after European settlers drove the species to near extinction. Perched atop a fence at Badlands National Park, Troy Heinert peers from beneath his wide-brimmed hat into a corral where 100 wild bison await transfer to the Rosebud Indian Reservation.

Descendants of bison that once roamed North America's Great Plains by the tens of millions, the animals soon thunder up a chute, take a truck ride across South Dakota and join one of many burgeoning herds Heinert has helped reestablish on Native American lands. "Every fall, national parks get a good count, and decidewhich animals could be part of the surplus program," Heinert says. Heinert nods in satisfaction to a park service employee as the animals stomp their hooves and kick up dust in the cold wind.

He takes a brief call from Iowa about another herd being transferred to a tribe, then speaks with a fellow trucker about yet more bison destined for Wisconsin. By nightfall, the last of the American buffalo shipped from Badlands are being unloaded at the Rosebud reservation, where Heinert lives. The next day, he is on the road again, delivering 100 bison to another tribe, the Cheyenne River Sioux.

"We're able to take those animals and redistribute those to tribes to either enhance their herd or start a new herd," Heinert says. Most bison in the North America are in commercial herds, treated no differently than cattle. Some 82 tribes across the U.S. and Canada -- from New York to Alaska -- now have an estimated 20,000 bison in 65 herds -- and that's been growing in recent years along with the desire among Native Americans to reclaim stewardship of an animal their ancestors lived alongside and depended upon for millennia.

European settlers destroyed that balance when they slaughtered the great herds. "And it forced us as indigenous people, to move to reservations and, you know, completely change our lifestyle," Heinert says. Bison almost went extinct until conservationists including Teddy Roosevelt intervened to reestablish a small number of herds largely on federal lands.

Native Americans were sometimes excluded from those early efforts carried out by conservation groups. Such groups more recently partnered with tribes, and some are now stepping aside. The long-term dream for some Native Americans: return bison on a scale rivaling herds that roamed the continent in numbers that shaped the landscape itself.

Heinert, 50, a South Dakota state senator and director of the InterTribal Buffalo Council, views his job in practical terms: Get bison to tribes that want them, whether two animals or 200. "We talk to tribes about why they want buffalo or what they're going to use them for. One is that cultural and spiritual connection.

And having that food sovereignty," Heinert says. This fall, Heinert's group has moved 2,041 bison to 22 tribes in 10 states. Bison for centuries set rhythms of life for the Lakota Sioux and the many other nomadic tribes that followed their annual migrations.

Hides for clothing and teepees, bones for tools and weapons, horns for ladles, hair for rope -- a steady supply of bison was fundamental. At so-called 'buffalo jumps', herds would be run off cliffs, then butchered over days and weeks. Archeologists have found immense volumes of bones buried at some sites, suggesting processing on a major scale.

European settlers and firearms brought a new level of industry to the enterprise as hunters, U.S. troops and tourists shot bison and a growing commercial market used their parts in machinery, fertilizer and clothing. By 1889, few bison remained: 10 animals in central Montana, 20 each in central Colorado and southern Wyoming, 200 in Yellowstone National Park, some 550 in northern Alberta and about 250 in zoos and private herds. Piles of buffalo skulls seen in haunting photos from that era illustrate an ecological and cultural disaster.

The day after the bison transfer from the Badlands, Heinert's son T.J. sprawls flat on the ground, his rifle scope fixed on a large bull bison at the Wolakota Buffalo Range. The tribal enterprise in just two years has restored about 1,000 bison to 28,000 acres (11,300 hectares) of rolling, scrub-covered hills near the Nebraska-South Dakota border. Pausing to pull a cactus paddle from the back of his hand, Heinert looks back through the scope.

The 28-year-old has been talking all morning about the need for a perfect shot and the difficulty in 40-mile (64-kilometer) an hour winds. The first bullet goes into the animal's ear, but it lumbers away a couple hundred yards to join a larger group of bison, with the hunter following in an all-terrain vehicle. Two more shots, and after the animal finally goes down, Heinert drives up close, putting the rifle behind its ear for a fatal shot that stops its thrashing.

Heinert is very disappointed it wasn't an instant kill. Back at Wolakota range, Daniel Eagle Road approachs the bison shot by T.J. Heinert.

Eagle Road rests a hand on the animal's head. Heinert gets out some chewing tobacco, tucks some behind his lip and passes the tin to Eagle Road who does the same. Heinert sprinkles tobacco along the bison's back and prays.

Chains fasten around the front and hind legs and the carcass is hoisted onto a flatbed truck for the bouncy ride to ranch headquarters. About 20 adults and children gather as the bison is lowered onto a tarp, then listen solemnly to tribal elder Duane Hollow Horn Bear. Soon the tarp is covered with bloody footprints from people butchering the animal.

They quarter it, sawing through bone, then slice meat from the legs, rump, and the animal's huge hump. Children, some only 6, are given knives to cut away skin and fat. The stomach is washed out for use in soup.

The pelt is scraped and spread on a railing to dry. The skull is cleaned and the tongue, a delicacy, cut out. Then comes an assembly line of slicing, grinding and packaging of meat distributed to families through a food program run by the tribal agency that operates the ranch.

The work lasts all day and resumes the next, when bones are boiled for broth. A first for many, the harvest illustrates a challenge for the Rosebud Sioux and other tribes: few people have butchering skills and cultural knowledge to establish a personal connection with bison. Katrina Fuller, who helped guide the butchering, dreams of training others so the reservation's 20 communities can come to Wolakota for their own harvest.

"For us, the buffalo harvest is about building our relationship with buffalo.

Working together, working with them, it's culturally empowering," Fuller says.