Meet the truck driver in the US, gives tour of lux truck interior with fridge

Samuel Mulwa, a Kenya working as a trucker in the US, has offered a glimpse of the luxurious truck he drives.

Samuel Mulwa gave a tour of the truck he drives in the US. Photos: El and Nic.
Source: UGC

Mulwa gave a tour of the cabin, saying he rarely spends time at home.

"It's very comfortable and that is why you can drive for hours. I spend 80% of my time here.

I am usually home for only two or three days in a week."

PAY ATTENTION: ?heck out news that is picked exactly for YOU ? find the "Recommended for you" block on the home page and enjoy! 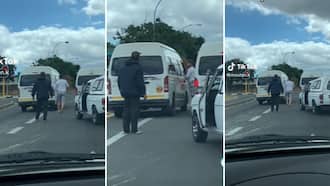 Video of man running after taxi and hitting it has Mzansi stressed for man's life: "Most dangerous thing"

The front end of the cabin where he sits while driving is huge, and one can comfortably stand up. The sleeping quarters have two bunks beds, and he explained that:

Next to the bed is a fridge where Mulwa puts the food he prepares for long trips and comes complete with a small freezer.

"I don't cook in the truck but prepare stew for two weeks and store it here. I also have a rice cooker in the truck."

The trucker explained that he prepares his food because the meals served at truck stops are unhealthy.

Atop the fridge is a closet where Mulwa puts his bags and has rods where he can hang clothes.

Mulwa's truck also has a foldable table that could be used for reading.

Above it sits a microwave for warming food and a space for hanging a TV screen. 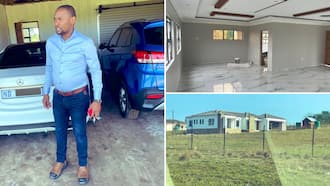 Proud man puts every cent he has into building his dream home, took him 6 months: Mzansi people are inspired

"Some truckers even play video games on their screens."

Mulwa noted that the only thing missing in the cabin is the bathroom, which he accesses at truck stops. [embedded content]

The young man previously said he was introduced to the business by a friend and gave up his career in the medical field.

He admitted that trucking was rewarding, disclosing that:

"The payment depends on one's driving experience. When I started, I made around R6 000 a month before taxes.

SA woman in mining shares 4 pics of herself at work, Mzansi stans lady celebrating her success

In another story, Briefly News previously reported that a mine worker was proud to show that she was flourishing in the mining industry. The lady's pictures received attention from online users, who were impressed.

A woman's post gave people a sneak peek into the working environment for a woman in mining. People applauded the lady for her inspiration in a male-dominated industry.

PAY ATTENTION: ?heck out news that is picked exactly for YOU ? find the "Recommended for you" block on the home page and enjoy!