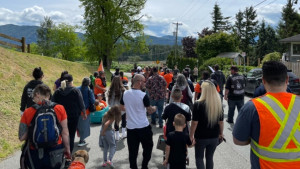 Nearly six months after attendees of a march to honour residential school victims and survivors in Mission, B.C. reported that a man deliberately drove a truck into the crowd - a criminal charge has been laid. In a statement Wednesday, Mission RCMP said one charge of dangerous operation of a motor vehicle was approved by Crown counsel after a "lengthy and complex investigation" into a "serious incident." The accused, 77-year-old Richard Manuel, is next due in court in January of 2023.

On June 4, a crowd gathered on Lougheed Highway with a plan to march to the grounds of the former St. Mary's Indian Residential School. Hundreds of children were taken from their families to that institution, which was operated by the Roman Catholic Church and later the federal government.

It did not close until 1984. "As the group moved along the roadway, an incident occurred resulting in the driver striking several persons along the way," the most recent update from Mounties says. In a news release on the day of the march, the Mission RCMP said four people were struck, two people were taken to the hospital with injuries and the driver did not remain at the scene.

The day after the march, Troy Ingraldi, who was doing traffic control at the event, spoke to CTV News and described what happened from his point of view. "The truck came speeding up, there was children in the right-hand lane. I wanted to make sure the children were fine, so I stepped in front of the vehicle.

He stopped, but then he continued to go and that's when he ran me over," he said. March organizer Chris Robinson, from the Sq'ewlets First Nation, also spoke to CTV News and said the driver came dangerously close to where children and elders were marching and made no attempt to slow down. "He stepped on the throttle and he started flying at us."

Robinson also said the incident was a stark reminder that the work of truth and reconciliation remains incomplete in Canada.

"Stuff like what happened yesterday is exactly why we march," he said at the time.

Two days after the march, authorities said the driver of the pickup truck had turned himself in, but that no arrests had been made.