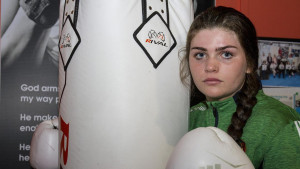 Sliabh Luachra Boxing Club members held a truly well deserved and hard earned welcome home night for their heroic European Silver Medallist Mary McDonagh in the presence of family and friends recently at their base on the Cordal Road, Castleisland. ary has had a fantastic year and ended up with the massive achievement of winning a European Silver Medal and a making history for the club by being the first ever female to bring home a European medal to club and county. She is already back in hard training for the coming season with the aim of claiming that gold medal. The club thanked Cllr.

Charlie Farrelly for his address and encouragement on the occasion and for his constant support for the club. Daniel, on DJ duties, and Majella Riordan were also thanked for their support and, not least, the club's coaches and volunteers. The remarkable achievements of the year were also celebrated with an awards night in the presence of the families and friends of the boxers involved.

The club also celebrated 16 years since the opening of the door in 2006. And what a year it has been for Sliabh Luachra Boxing Club with a total of 20 county champions; six Munster champions; seven Irish titles and two European Silver medals won by Jamesie Casey and Mary McDonagh. Club Coach Jennifer O'Sullivan was selected to travel to Erzurum in Turkey in August as manager of the girls' squad of the Irish School Boy/Girl Team at the European Boxing Championships in August.

This was the meeting at which the Sliabh Luachra club boxer, Jamesie Casey won his European silver medal. "Well done to all our boxers, coaches and volunteers. We are so proud of each and every one of you.Today we finally got a chance to celebrate and reward our boxers for their dedication, commitment and the sacrifices they make to win these titles," said a club spokesperson.

Sliabh Luachra Boxing Club would like to thank all its sponsors and especially its main sponsor Kingdom Truck and Trailer.

"Our coaches and volunteers are amazing and we would like to thank ye all," said the spokesperson in conclusion.