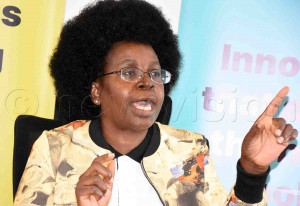 The recent announcement by President Yoweri Museveni that the government was to soon ban the importation of buses into the country, has started to bear fruit as local transport companies have placed orders with the local motor vehicle manufacturer, Kiira Motors. Dr Monica Musenero, the Minister for Science, Technology and Innovation, said there are signs that Government's intention to reduce pollution by introducing safe and exquisite mass transport means, will soon be realised. "We have been informed that Kiira Motors has so far received 28 orders for custom-made buses.

This is enough to launch local bus manufacturing in a big way," she said at the launch of National Science Week on Tuesday, at Kololo ceremonial ground, in Kampala. He said the plan, which is about decongesting Kampala by replacing the matatus with buses was in high gear. "We shall later put in place prototypes for special service vehicles (SUVs) and saloon cars.

Many Ugandans say we are simply assembling vehicle parts from other countries. But that is not true. We are manufacturing these vehicles and assembling is just a small component of the process, although it's essential," she said.

The minister made the remarks at the science week running under the theme Uganda in 2040; the future we want through Science, Technology and Innovation, and is intended at exhibiting the country's potential in fields of research and innovation. It is focusing on mobility innovations, especially for the public transport sector where electric vehicles and motorbikes are being made for mass transport - not only to address pollution but also traffic congestion. Market available

Reports have revealed that the motor vehicle market is growing steadily with regional vehicle sales anticipated to reach over 630,000 vehicles annually to the East African Community (EAC), and 10 million vehicles annually on the African continent by 2030. This growing demand for vehicles remains an untapped opportunity for domestic industrialization. Used vehicle imports continue to dominate the market leading to haemorrhaging foreign exchange of over £450m annually, according to officials.

"Although road transport accounts for 95% of passenger traffic and 96.5% of freight cargo, Uganda has a motorization rate of 14 vehicles per 1,000 persons. This is far below 44 for Africa, and 200 in developed countries," said a Kiira Motors official on condition of anonymity. According to Museveni, Uganda loses a lot of money to foreign countries in form of imports of vehicles yet the same can stay in the country.

He said that the country spends £550m per year on vehicle importation, adding that all the money the country obtains from coffee goes back into buying second-hand vehicles.