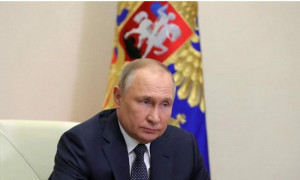 Brussels. In a historic step, the European Union Parliament on Wednesday declared Russia a "state sponsor of terrorism". MEPs voted in favor of a resolution declaring Russia a state sponsor of terrorism. Simultaneously, EU leaders have declared that Moscow's military attacks on civilian targets such as energy infrastructure, hospitals, schools and shelters violate international law.

However, this EU decision is largely symbolic as the EU has no legal framework to support it. The union has already imposed unprecedented sanctions on Russia for its invasion of Ukraine. Ukrainian President Volodymyr Zelensky has urged the United States and other countries to declare Russia a "state sponsor of terrorism".

Zelensky accused the Russian military of targeting Ukrainian citizens, which Moscow denied. US Secretary of State Antony Blinken has so far refused to put Russia on the list of "countries sponsoring terrorism" despite proposals from both houses of Congress.