Canada at the World Cup, ministers to testify at inquiry 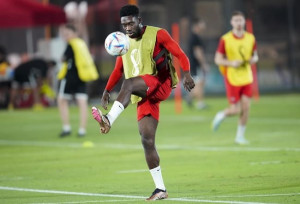 Canada forward Alphonso Davies works on his foot work with the ball during practice at the World Cup in Doha, Qatar, Tuesday, Nov.

22, 2022. THE CANADIAN PRESS/Nathan DenetteNovember 23, 2022 - 1:15 AMIn The News is a roundup of stories from The Canadian Press designed to kickstart your day.

Here is what's on the radar of our editors for the morning of Nov.

23 ...What we are watching in Canada ...The day has finally arrived. Canada will be playing its first World Cup game in 36 years, taking on second-ranked Belgium in group stage action today in Qatar. Coach John Herdman told the media yesterday that star Alphonso Davies is "fit now" and "ready to go" after dealing with a hamstring strain.A soccer rivalry is forming in Montreal between fans of Belgium and Canada.

Montreal has a sizable French-speaking Belgian community.---Also this ...Three federal ministers are slated to testify today at the public inquiry that is scrutinizing the federal government's response to the "Freedom Convoy" protests that overran downtown Ottawa and choked several border crossings last winter.Justice Minister David Lametti, Defence Minister Anita Anand and Transport Minister Omar Alghabra are on the witness list as the inquiry digs into Ottawa's decision to invoke the Emergencies Act in response to the weeks-long demonstrations.Lametti's testimony is expected first, but the federal attorney general's answers may be restrained by solicitor-client privilege, which he cited earlier this year when giving testimony at a parliamentary committee studying the same issue.Anand is likely to face questions about Alberta's request for help from the Canadian Armed Forces to handle a border blockade in Coutts, though the military was not brought in as part of the emergency powers.Alghabra, whose testimony is expected last, is likely to be asked about the economic costs of border blockades, since his department was the one to calculate the £3.9-billion cost of border shutdowns.The Public Order Emergency Commission is in its sixth and final week of public hearings, with Prime Minister Justin Trudeau expected to testify on the final day of proceedings Friday and a final report to be delivered to Parliament by early next year.---What we are watching in the U.S. ...A shooting at a Walmart in Virginia on Tuesday night left several people dead and wounded, though the exact numbers were not immediately known, police said. The shooter was among the dead, officials said.Officers responded to a report of a shooting at the Walmart on Sam's Circle around 10:15 p.m. and as soon as they arrived they found evidence of a shooting, Chesapeake Officer Leo Kosinski said in a briefing.Over 35 to 40 minutes, officers found multiple dead people and injured people in the store and put rescue and tactical teams together to go inside to tend to victims, he said.Police believe there was one shooter, who is dead, he said. They believe that the shooting had stopped when police arrived, Kosinski said.

He did not have a number of dead, but said it was ``less than 10, right now.''Kosinski said he doesn't believe police fired shots, but he could not say whether the shooter was dead of a self-inflicted gunshot.``We are shocked at this tragic event at our Chesapeake, Virginia store,'' Walmart tweeted early Wednesday. ``We're praying for those impacted, the community and our associates. We're working closely with law enforcement, and we are focused on supporting our associates,'' the tweet said.Mike Kafka, a spokesman for Sentara Healthcare, said in a text message that five patients from the Walmart are being treated at Norfolk General Hospital. Their conditions weren't immediately available.The Virginia shooting comes three days after a person opened fire at a gay nightclub in Colorado, killing five people and wounding 17.That shooter, who is nonbinary, was arrested after patrons at the club tackled and beat them.

The shootings come in a year when the country was shaken by the deaths of 21 in a school shooting in Uvalde, Texas.Tuesday's shooting also brought back memories of another shooting at a Walmart in 2019, when a gunman police say was targeting Mexicans opened fire at a store in El Paso and killed 22 people. Walmart didn't have a security guard on duty that day.---What we are watching in the rest of the world ...Two blasts went off near bus stops in Jerusalem on Wednesday, killing one person and injuring at least 14, in what police said were suspected attacks by Palestinians.The first explosion occurred near a bus stop on the edge of the city, where commuters usually crowd waiting for buses. The second went off in Ramot, a settlement in the city's north.

Police said one person died from their wounds and Israel's rescue service Magen David Adom said four people were seriously wounded in the blasts.The apparent attacks came as Israeli-Palestinian tensions are high, following months of Israeli raids in the occupied West Bank prompted by a spate of deadly attacks against Israelis that killed 19 people. There has been an uptick in recent weeks in Palestinian attacks.The violence also comes as former Israeli Prime Minister Benjamin Netanyahu is holding coalition talks after national elections and is likely to form what's expected to be Israel's most right-wing government ever.While Palestinians have carried out stabbings, car rammings and shootings in recent years, bombing attacks have become very rare since the end of a Palestinian uprising nearly two decades ago.The U.S. Embassy in Jerusalem condemned the violence, as did EU Ambassador to Israel Dimiter Tzantchev.The Islamic militant Hamas, which rules the Gaza Strip and once carried out suicide bombings against Israelis, praised the perpetrators of the attacks, calling it a heroic operation, but stopped short of claiming responsibility.More than 130 Palestinians have been killed in Israeli-Palestinian fighting in the West Bank and east Jerusalem this year, making 2022 the deadliest year since 2006.

The Israeli army says most of the Palestinians killed have been militants. But stone-throwing youths protesting the military incursions and others not involved in confrontations have also been killed.At least seven more Israelis have been killed in Palestinian attacks in recent weeks.---On this day in 1815...Canada's first street lamps, fuelled by whale oil, were installed in Montreal.---In entertainment ...The multiverse-hopping adventure film ``Everything Everywhere All At Once'' leads the nominations for the Film Independent Spirit Awards. The film received eight nominations, including best feature, best director, best lead actor for Michelle Yeoh, supporting actors Ke Huy Quan and Jamie Lee Curtis and breakthrough for Stephanie Hsu.

The awards celebrate the best in independent filmmaking and recently raised the budget cap from £22.5 million to £30 million. The organization also shifted to gender neutral acting awards. The main acting categories now have 10 nominees each.

The beachside ceremony will be held in Santa Monica on March 4, 2023, the weekend before the Oscars.---Did you see this?Government statistics show fewer than one-third of Ukrainians approved for temporary Canadian visas have arrived in the country, even as hundreds of thousands of others remain in the queue waiting to find out if they qualify to travel to Canada.The temporary visas are part of the special immigration measures introduced by the federal government in the wake of Russia's invasion of Ukraine giving Ukrainians emergency authorization to travel and stay in Canada.According to Immigration, Refugees and Citizenship Canada, the government received nearly 700,000 requests from Ukrainians to travel to Canada under the special program between March and November.Yet the department says only around 420,000 applications have been approved so far, while statistics from the Canada Border Services Agency show about 117,000 have actually reached Canada.

The majority of those arrived by air.It wasn't immediately clear why so few Ukrainians authorized to travel to Canada have done so.---This report by The Canadian Press was first published Nov.