Athens putting the breaks on trucks 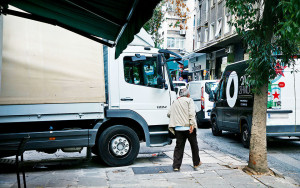 Authorities are reportedly giving serious consideration to the possibility of banning the supply of goods to stores in Athens during the day in order to facilitate the movement of vehicles and to reduce air pollution. The relevant proposal is expected to be submitted on Wednesday by the competent deputy regional governor of the Central Sector of the capital, Giorgos Dimopoulos, to the Regional Council of Attica. On Tuesday, the Athens City Council unanimously voted in favor of Mayor Kostas Bakoyannis’ proposal to ban the unloading of goods during the day while approving the submission of a request to the Regional Council, which is the body responsible for the change.

The proposal states that “in the Municipality of Athens, a time limit is set for the circulation and supply of businesses, supermarkets and other shops in the city from 9 p.m. to 9 a.m. the next day, with any type of truck.” “For the remaining hours, their supply will be carried out with vehicles of a gross weight up to two tons,” it said. However, the hours regarding the supply of shops in the historic center will remain as it is for the time being since a new ministerial decision or presidential decree would be needed to change it.

In this area, loading and unloading of goods is allowed from 7 a.m to 10.30 a.m. and from 2.30 p.m. to 5.30 p.m. In comments to Kathimerini, Deputy Regional Governor Dimopoulos said the next step will be the cooperation of the municipality and the regional authority, in order to submit a request to the relevant ministries for the change of hours in the historic center. “Given that we now have more than 6.5 million tourists in Athens, many months a year, we cannot have trucks around the Parthenon all the time,” he stressed.

“In all European capitals, shops are supplied during the night so that on the one hand there is no extra traffic load and for environmental reasons,” he added.

Regarding the reaction of businesses in the capital and the commercial world to the proposed change, which if passed by the Regional Council will become mandatory, Dimopoulos said that an attempt was made to find a common solution but was impossible. “Everyone had different opinions and different schedules and there was no possibility of convergence,” he noted.