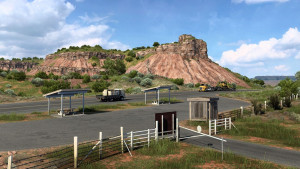 It's barely been a week since American Truck Simulator thundered across the Texan border, but already SCS Software is setting course for a new destination, with the developer having now confirmed Oklahoma as the trucking sim's next DLC expansion. Oklahoma will be American Truck Simulator's 12th explorable state, joining California, Nevada, Arizona, New Mexico, Oregon, Washington, Utah, Idaho, Colorado, Wyoming, Montana, and Texas - and its announcement isn't all that unexpected given SCS' continued left-to-right march across the US, and Oklahoma slotting so neatly above the recently released Texas. "While Oklahoma tends to have an unfortunate reputation of being a rather arid place," SCS writes in its announcement post, "sometimes it's much better to avoid judging a book by its cover.

The state is home to wonderful national parks, several natural marvels, and historical places full of mysteries and legends. And if you are looking for something more practical instead, the local road network and a strong economy will keep every trucker properly busy."

That's pretty much all SCS has to say about Oklahoma for now, but those eager for a glimpse of the Sooner State prior to its eventual American Truck Simulator arrival can find a selection of screenshots and a trailer on Steam. Its release date is merely listed as "coming soon".

And in related news, American Truck Simulator and its various DLC expansions are currently discounted in the Steam Autumn Sale, so now's the perfect time to get acquainted with its soothing, scenic charms if you haven't done so already.