Much-Needed Grain Piles Up in Canada Due to Overwhelmed Railways 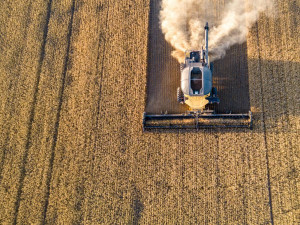 (Bloomberg) -- The world sorely needs more grains, and Canada has a bin-busting harvest this year. Unfortunately, there aren't enough rail cars to transport it all. There were almost 2,400 outstanding grain-car orders for the nation's two major carriers, Canadian National Railway Co. and Canadian Pacific Railway Ltd. in the latest data from Ag Transport Coalition.

"We have to make up these orders," Wade Sobkowich, the executive director of the Winnipeg-based Western Grain Elevator Association, said Tuesday in a telephone interview. "We were concerned going into this year and unfortunately it feels like our concerns are founded." Shippers are worried about the railways' ability to haul grain as Canadian farmers are harvesting the nation's third biggest wheat crop on record and 42% more canola than a year ago. Canadian Pacific has fallen behind orders for three weeks and grain companies will have to defer sales if the trend continues, Sobkowich said.

Canada's harvest rebound comes as world grain supplies have been uncertain following the war in Ukraine. Transport woes are also hampering the US crop as drought is drying up the Mississippi River, resulting in fewer barges to move corn and soybeans. More stories like this are available on bloomberg.com