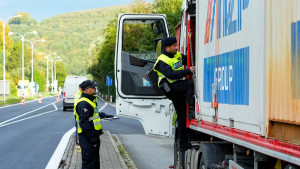 Something unusual is happening on the Czech-Slovak border. Except for a brief period in 2020 because of the COVID-19 pandemic, the 250 kilometre-long border separating the two countries has largely been a fiction since both entered the Schengen zone in 2007. A driver hardly notices they have crossed countries and checks are non-existent.

But on Thursday, the Czech Republic temporarily reinstated controls on its border with Slovakia in response to an increase in illegal migration.

Vit Rakusan, the Czech interior minister, said in a statement earlier this week that illegal migration, mainly from Syria, had risen by 1,200 per cent this year. He estimated that Czech police have seized a total of 11,000 illegal migrants since the beginning of the year.

"We will look for solutions at the European level, but unfortunately it was necessary to take such a radical step," explained Rakusan. After the announcement from Prague, Austria's interior minister, Gerhard Karner, said on Wednesday that his country will this week also introduce temporary controls on its border with Slovakia so as to prevent migrants from using Austria as an alternative route.

"It's imperative to respond before the traffickers do," he stated.

None of this has gone down well in Slovakia, which expects some disruptions to trade because of the increased border checks. "The problem needs to be solved with communication, not with such surprises," Slovakian Prime Minister Eduard Heger said on Wednesday. "The step taken by the Czech Republic and other countries is not correct because it goes against the principles of Schengen."

Austrian Chancellor Karl Nehammer is expected to meet with Hungarian Prime Minister Viktor Orban and Serbian President Aleksandar Vucic next week to discuss the migration issue. Austria has imposed controls along its borders with Hungary and Slovenia since 2015. Prague is calling on the European Union to take more action.

Germany's police union has also called for more security checks on the Czech-German border, although Berlin has so far said it will not do so. The reason is the large increase in migrants, especially of Syrian origin, who are trying to get to Germany or Northern Europe via the so-called Balkan route, which passes through the Balkan states into Hungary, Slovakia and the Czech Republic.
Officially, Prague says the restrictions on the Slovak border are "temporary" measures that will only be in effect for ten days. Afterwards, the Czech government plans to evaluate the situation.

Some have drawn comparisons between the latest panic about refugees and migrants from the Middle East and the warm welcome Central European states have given Ukrainian refugees fleeing the Russian invasion.

More than 439,000 Ukrainian refugees have been accepted into the Czech Republic, about four per cent of its population, according to the UN Refugee Agency. Slovakia, a much smaller country, has taken in just under 100,000. "The response has been diametrically different," said Filip Kostelka, a professor at the European University Institute.

"While a majority of Czechs welcomed Ukrainian refugees, the population remained suspicious and rather hostile towards refugees from the Middle East." A survey published this year by the Public Opinion Research Center, a local pollster, found that 75 per cent of Czechs agree that refugees from Ukraine should be accepted in the country. The same pollster found in a 2015 study that more than 70 per cent of Czechs want to refuse to accept refugees and immigrants from Syria and North Africa.

The reasons for these disparities are partly historical, cultural and demographic, Kostelka says. The vast majority of the Ukrainian refugees are women and children, whereas many Middle Eastern refugees are young, single men. Ukrainians were also the largest overseas group living in the Czech Republic before Moscow's full-scale invasion of Ukraine in February.

Many Czechs also view the Ukraine war through their own history. Czechslovakia, as the country was known before Slovakia broke away in 1993, was occupied Nazi Germany in 1938 and the Soviet army invaded in 1968 to put down protests against the communist regime. "Most Czechs realise that Ukrainians heroically fight for the freedom of the entire democratic world," said Kostelka.

However, he added, in case of refugees from the Middle East, "Czechs fear integration problems and suspect that some of the refugees are in reality economic migrants."

It also comes amid major political unrest in Central Europe, sparked by an ongoing cost of living crisis. Inflation soared to 17.2 per cent in the Czech Republic and around 14 per cent in Slovakia last month, some of the highest increases in Europe. The Czech Republic has also seen one of the biggest surges in energy and household costs of any European country.

Major demonstrations have been held in Prague in recent weeks against the coalition government, which survived a no-confidence vote in parliament in early September and which is accused of not doing enough to help ordinary people amid the economic crisis. Tens of thousands of people attended an anti-government rally in the capital on Wednesday, a national holiday, which was dominated by politicians from far-left and far-right parties. The topic of migration from the Middle East provides opposition parties with an additional means to attack the coalition government, but analysts say that it's not likely to overtake the economic situation as a key issue.

"The debate on migration from Africa and Asia is rather marginal now and very much overshadowed by the energy crisis, inflation and Russian-Ukrainian war," said Lubomir Kopecek, a political science professor at Masaryk University. Still, opposition politicians have begun to rebuke the government for its allegedly slow reactions to the problem.

"Migration is enormous...the government pretended to have it under control, but unfortunately it doesn't," said Jaroslav Bzoch, an MP for the opposition ANO party and member of the subcommittee for migration and asylum policy, at a press conference this week, according to local media. Andrej Babis, the former prime minister and head of ANO, which increased its share of seats in major cities at this month's municipal elections, is expected to focus on migration in the coming weeks.

His party has already alleged the government has provided Ukrainian refugees with too much assistance while ignoring Czech nationals. Before his defeat at last October's general election, Babis campaigned heavily on an anti-migration ticket, and welcomed Hungarian Prime Minister Orban, a noted critic of the EU's migration policy, on his campaign trail. Babis, who is currently facing trial for alleged corruption, plans to run in next January's presidential election.

He is currently the frontrunner in the polls. Tomio Okamura, the leader of the far-right Freedom and Direct Democracy (SPD), the second largest opposition party, has vowed to take the government to task over its migration responses. Rakusan, the interior minister, "is taking citizens, especially those in Moravia, hostage," Okamura said this week, referring to the eastern region of the country.

In Slovakia, the majority of the debate so far has focused on domestic politics and failures of the government, rather than migrants themselves, said Katarina Klingova, a senior research fellow at the GLOBSEC Policy Institute, a Bratislava-based think tank. The current Slovak government is in crisis. In early September, it lost its majority in parliament after the Freedom and Solidarity party (SaS), a junior partner, quit.

In an interview last week with the Financial Times, Prime Minister Heger warned that the country's economy is at risk of "collapse" over rising prices, unless it gets significant help from the EU. Juraj Krupa, a Slovakian politician from the SaS and chairman of parliament's committee for defence and security, has called for restrictions on Slovakia's border with Hungary and an investigation into the response of Interior Minister Roman Mikulec, who has survived several no-confidence votes. "Migrants come to Slovakia from Hungary, so it is logical that we should also introduce controls at the border, as the situation is absolutely not under control," Krupa said, according to local media reports.

Slovakia's Ministry of the Interior subsequently issued a statement opposing his comments. Certain Moscow-friendly politicians and commentators are also using the latest concerns about migration from the Middle East and North Africa to critique Bratislava's support for Ukraine, an indication that some are trying to connect the two issues, said Klingova. Some, including those accused of spreading pro-Moscow messages, have made claims that "such a situation was to be expected with the eruption of the [Ukraine] war, despite the fact that majority illegal migrants are not from Ukraine," Klingova added.

The situation elsewhere in Central Europe is divided.

On 20 September, the opposition Slovenian Democratic Party (SDS), led by former Prime Minister Janez Jansa, tabled a motion of censure against Interior Minister Tatjana Bobnar over her decision to remove a fence along its border with Hungary that was erected in 2015 to stop illegal migration.

Slovenia reportedly saw a 13 per cent increase in irregular border crossings between January and August, compared to the whole of last year, according to local media.