One person has been killed after their 18-wheel truck veered off a highway overpass before bursting into flames in front of horrified drivers, police in Texas have said. The crash occurred on Wednesday on US-75 about 26 miles north east of downtown Dallas, Texas, when police say the truck collided with a vehicle before veering onto the road below it. Dashcam video obtained by WFAA and CNN on Wednesday showed the truck veering off the US-75 highway before bursting into flames on Sacey Road, where drivers waiting at a red light witnessed the horrifying crash.

"I don't know. It was surreal. It felt like something you see in a movie," said Renee Reid, who witnessed the incident with her husband, in an interview with WFAA.

"It was like slow motion, the truck coming down. You can't believe there's a truck coming down off the bridge and then boom," Anthony Reid said. Issuing a statement following the crash, the Allen Police Department said the truck driver "did not survive".

No further details were released about the victim's death or their identity. 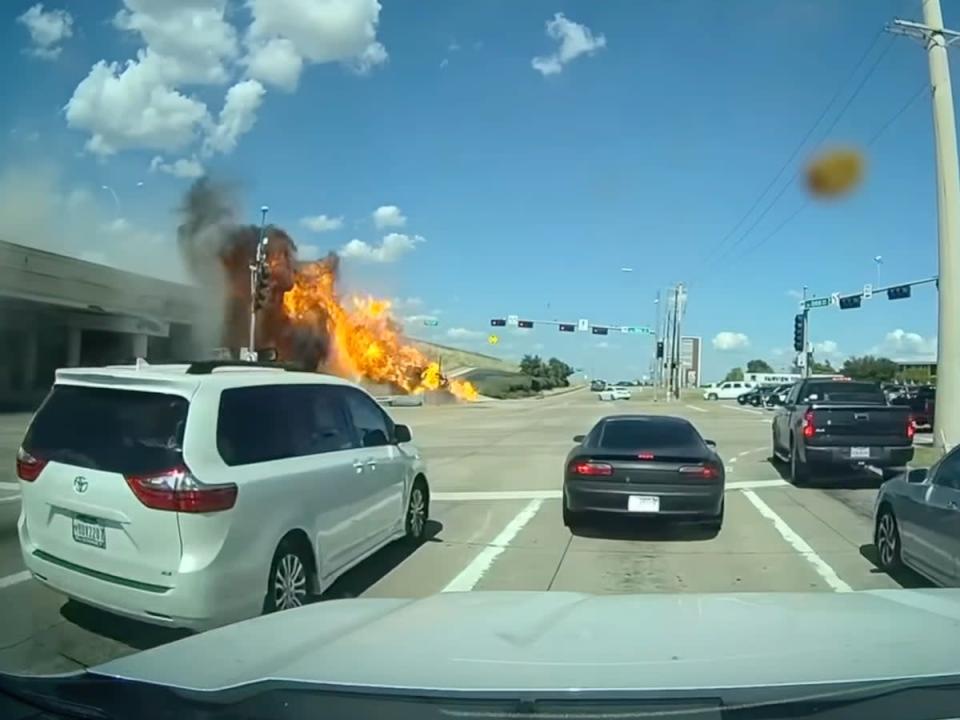 A dashcam camera caught the terrifying crash (via WFAA)

Police said the truck had collied with another vehicle on US-75, whose owner was uninjured. "We thank the officers working diligently to process the scene to ensure these notifications can be made in a timely manner," said the police department. "Our thoughts and deepest condolences are with the victim's family and friends as they deal with their loss." Multiple drivers exited their vehicles to attempt to rescue the driver, which proved impossible.

"People started coming out of the car to see if they could go help, but it was just no way," said Edith Pearson to WFAA. "I went home and I just started crying. I felt like my life, I felt like I died with that person because it was so close." The road was closed on Wednesday while investigators inspected the scene, and was due to reopen.

It remains unclear who owned the truck, which WFAA reported was transporting letters and packages with United States Postal Service branding.