[Stay on top of transportation news: Get TTNews in your inbox.] HANOVER, Germany -- Nikola Corp. unveiled a prototype of a European-spec fuel cell-powered Nikola Tre Class 8 model and also announced that it is taking orders for the battery-electric version in the region, moves that President Michael Lohscheller said demonstrate the company's commitment to working collaboratively to bring its zero-emission trucks to a global base of customers. "We are an American company that is proud to be working side by side with the greatest minds from Europe and around the world," Lohscheller said during a Sept.

19 media event Nikola co-hosted with manufacturing partner Iveco Corp. during the IAA Transportation 2022 conference. Iveco builds the cabs for the Nikola Tre models, including those sold in the United States. Iveco Group CEO Garrit Marx stressed that his company is committed to its partnership with Nikola, and touted the progress the two have made. 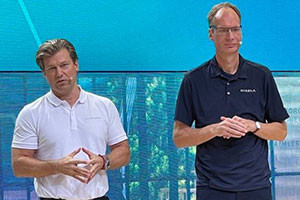 Iveco Group CEO Garrit Marx (left) and Nikola President Michael Lohscheller address attendees at IAA Transportation 2022 in Hanover, Germany) "Our partnership with Nikola continues to be the role model of successful collaboration," he said. "Iveco and Nikola have a solid alliance that began in 2019.

Together, we have met every single milestone on our path toward developing and deploying zero-emissions heavy-duty trucks in North America and Europe, despite all of the challenges we have faced along the way. And we have every intention of continuing with this great track record." Among those challenges was the 2020 resignation of Nikola founder Trevor Milton amid charges of misleading investors.

Milton currently is on trial for securities and wire fraud. Lohscheller, who also served as CEO of European automaker Opel, told North American reporters during a Sept.

20 interview that Nikola will overcome doubts some have about its future by focusing on building its business -- a business, he said, that is ahead of others that are planning to entire the fuel cell sector.

We pushed the boundaries of possibility as we reimagined what a cleaner world can look like at the largest commercial vehicle show on Earth. #Zeroemissions https://t.co/WsEmxpjk1x

"Everybody is announcing, but no one is in the market. We are in real business," he said, noting that the company sold 48 units in the second quarter and has targeted sales of 65-75 in the third quarter.

Nikola also is working to supply the hydrogen fuel its FCEV trucks will need. "We think a lot about hydrogen supply," Lohscheller said. "The strategy of Nikola is outstanding for various reasons. First, we have the trucks -- we have an electric truck and a hydrogen truck.

But we also have Nikola Energy. The job of the energy team is to make sure that hydrogen is available."

Can we cover the whole wide world with hydrogen? Of course not.

But we'll focus on going step by step.

That business unit has a facility in Arizona that focuses on hydrogen production, and also recently purchased three hydrogen fueling stations in California, he said. "Can we cover the whole wide world with hydrogen? Of course not.

But we'll focus on going step by step." Lohscheller said, stressing that the company aims to take control of the process -- a strategy he said differs from other manufacturers' approach on the EV side of lobbying government to propel build-out of a nationwide charging network. "We want to do it ourselves -- of course with partners, you can't do everything on you own -- but basically we want be in that business," Lohscheller said of hydrogen production. "Nikola has an energy business; the others don't say that." In the near term, he believes customers will focus on hub-to-hub operations that will allow for the construction of localized fueling infrastructure.

"We will make sure that if you buy the trucks, the hydrogen is there," he said. "You cannot cover the entire U.S. in hydrogen within a couple of months or a few years. But can you do stations on hub-to-hub? Absolutely."

As for the electric side, Nikola prefers to help customers tailor charging options to meet their needs. "Charging on their lot instead of setting up a complete network, I think that will take more time," he said. The company's strategy includes ensuring customers' needs are met, rather them leaving them to their own devices for fueling options.

Tamara Jalving of Yellow and TT's Connor Wolf join host Mike Freeze to discuss driver recruitment. Tune in above or by going to RoadSigns.ttnews.com. "If we said we'll sell you a truck and good luck finding hydrogen, that doesn't make your customer happy," Lohscheller said. "I have to make sure that I can offer you the hydrogen as well.

If I tell you where to find hydrogen but it's very expensive, that's also not a solution. So, we need to bring it all together." The fuel cell version of the truck will have a range of about 500 miles, continuous output of 645 horsepower, and can refuel in up to 20 minutes, Nikola said.

Lohscheller said the FCEV version will be on U.S. roads in the second half of 2023. With the opening of orders for the EV variant, the Tre is one step closer to hitting European roads, an important milestone in expanding availability of zero-emission trucks to European customers, Marx said. "It does not make any sense to commit to 100% of this technology or that technology," he said, "as only a smart mix of renewable fuels -- battery-electric and fuel cell-electric propulsion systems -- will address all commercial vehicle application."