Nikola Corporation has unveiled the European version of its Tre truck at the IAA Transportation event in Hanover, Germany.

As in other markets, European customers will be offered the Tre in both battery-electric vehicle (BEV) and fuel cell electric vehicle (FCEV) guises. The first of these is referred to as the Tre European 4x2 Artic and sports nine battery packs combining to offer total energy storage of up to 738 kWh. Nikola says this version of the Tre is good for a range of up to 530 km (329 miles) and that charging the batteries to 80 per cent capacity takes just 100 minutes when plugged into a 350 kW charger.

The batteries send their juice to a 480 kW electric powertrain. The truck has a 4,021 mm (158-inch) wheelbase and has been brought to life through a partnership with Iveco. Read Also: Prosecutor Says Nikola Founder Became A Billionaire By Lying To Investors 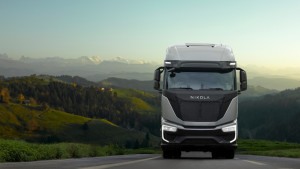 Meanwhile, the Nikola Tre FCEV Artic 6x2 is slightly smaller with a 3,932 mm (154.8 inch) wheelbase and can hold approximately 70 kg of hydrogen at a 700-bar pressure. It is said to offer a range of up to 800 km (497 miles) and can be refueled in just 20 minutes. Development of this model isn't as progressed as it is for the BEV version as the FCEV won't hit the European market until 2024.

"Today we are making history with the first products for the European market of IVECO's powerful partnership with Nikola Corporation," Iveco Group's truck business unit president Luca Sra described in a statement. "Together, our teams have designed a modular platform capable of hosting both fuel cell and battery propulsion technologies, starting with the European 4x2 Artic version of the Nikola Tre BEV heavy-duty truck making its debut here today. It is the first-ever electric-born modular platform for articulated heavy-duty tractors hosting both energy sources: battery-electric for missions of approximately 500 km and fuel cell electric powertrain for hauling up to 800 km in its first generation. A true revolution that marks a tangible step towards our ambitious goal of achieving a zero-emissions transport." 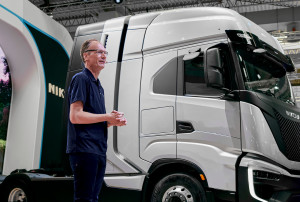