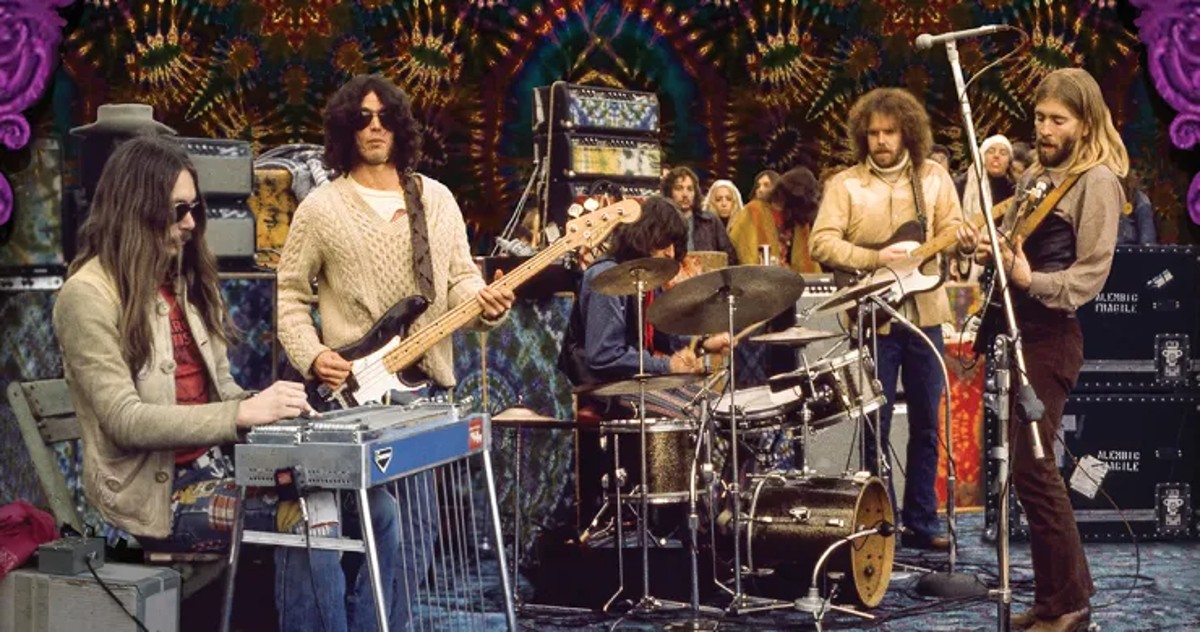 A companion piece to Grateful Dead's Lyceum Theatre 5/26/72, this New Riders concert album from the same venerable British venue is an equally celebratory piece of work. Its release supplies a missing link in that now-legendary tumultuous tale of psychedelic warriors on tour through England and the European continent fifty years ago. That distinction noted in this recording isn't wholly dissimilar to previous NRPS releases on the Omnivore label.

2020's Field Trip and Thanksgiving In New York City from the year prior contain tunes that reappear here in the varied and eclectic forms of "I Don't Need No Doctor" and "Last Lonely Eagle." And the country star of the time Charlie Pride's "Leaving On Her Mind" has the distinction of opening this near eighty-minute set, as it did the aforementioned latter release.

Still, the running order of the selections varies significantly across the three titles, no doubt making for an experience as fresh to hear as it was to play. While it's fair to say the New Riders were certainly hitting their collective stride at this point, they were nowhere near complacent: with unmistakable relish, for instance, they bound their way through yet another carefully-chosen cover in the form of "Hello Mary Lou," recorded with no little success in 1961 by teen idol and early country-rock pioneer Ricky Nelson (whose Stone Canyon Band featured bassist Randy Meisner who would go on to membership in Poco and the Eagles). Lyceum '72 is also distinguished by some most familiar names in the credits, not the least of which is that of the truly legendary Betty Cantor-Jackson.

She is one of the recordists whose work was later mixed by Jeffrey Norman and mastered by David Glasser-both of contemporary Grateful Dead archive renown-for unadorned audio clarity. The ambiance of the room comes through with almost the same realism as the band's musicianship. Perhaps the most significant notation, however, is the one for producer Rob Bleetstein, who's shepherded the exhumation of the NRPS vault in recent years.

It's evidence of his humility, however, that he deferred to road manager Sam Cutler for authorship of these liner notes: that in itself is a notable reference as the latter had also worked for the Rolling Stones when they returned to the road three years prior. In fact, Jagger, Richards and company's "Honkey Tonk Women" is the closer here (the second of that band's tunes along with, not surprisingly, "Connection"). The sweet and tasteful economy Buddy Cage displays on his pedal steel for "Truck Drivin' Man"-his instrument features some judiciously added effects elsewhere during "Sailin'"- conjoins with David Nelson's pithy Fender electric as the most prominent elements in this sleek blend of instruments.

But that mix isn't much more carefully tailored than the New Riders' group vocals, led by primary (but not sole) lead singer John "Marmaduke" Dawson, author of most NRPS originals like the harmony-laden "Glendale Train." The self-restrained playing by the rhythm section of bassist/vocalist Dave Torbert and former Jefferson Airplane drummer Spencer Dryden suits this deceptively relaxed (and relaxing) music, too; it is unobtrusive yet never slack.  Dutiful and spirited acknowledgments of this group's main influences has been previously documented to great length on Bear's Sonic Journals: Dawn of the New Riders of the Purple Sage. Yet the sound forged by the quintet on exhibit here is all the more authentic given how they revel in it (albeit in an understated fashion); it's validation of why the group remained a logical opening act for the iconic band at the top of this bill long past the early points when the NRPS lineup featured members of the Dead.

With a name twice removed, from a Forties western swing combo and a Zane Grey western novel, the choice of a moniker by this fivesome of cosmic cowboys may be at least partly tongue-in-cheek.

Nevertheless, as preserved for posterity on the twenty-seven (!) tracks of Lyceum '72, the ensemble clearly took themselves and their music seriously enough to not only warrant the historical references but do them justice as well.