Mercedes-Benz took the wraps off the eActros LongHaul at the IAA Transportation in Hannover, Germany, revealing a long-distance truck with a range of around 310 miles. This version of the eActros will be the first in Mercedes' lineup aimed at regional cargo delivery, as other versions of the eActros have been aimed at daily routes, and which are already in production. The eActros' LongHaul is expected to change expectations of electric trucks in Europe, while delivering the truck maker's first credible long distance hauler.

The eActros LongHaul, as has been hinted in months leading up to its debut, features three modular battery packs offering a total of over 600 kWh, powering two electric motors generating 400 kW (536 hp), while also being capable of a peak output of 600 kW (804 hp).

At launch, the eActros LongHaul will be offered in a tractor configuration, but later on Mercedes plans to expand the lineup with longer-wheelbase rigid tented variants.

The truck will also be the first battery-electric series-production vehicle to be manufactured entirely on the existing assembly line, rather than being modified at another location for electric power. The eActros will be produced alongside Mercedes' internal-combustion trucks in Worth.

"Since the last IAA four years ago we have moved forward at full speed with the transition to CO2-neutral transport. This year we already have eight pure battery-electric series-production vehicles in our portfolio," said Martin Daum, Daimler Truck CEO. 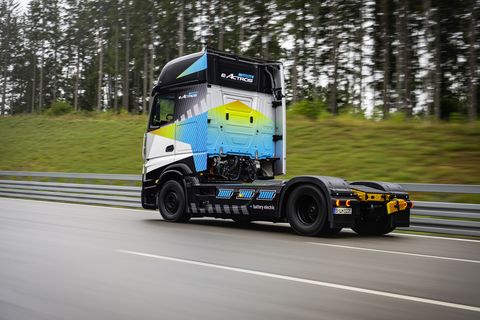 The eActros LongHaul is the brand's first electric truck aimed at longer highway routes and will also be produced as a rigid, long-wheelbase cargo carrier.

But it also arrives in an environment that is not particularly ready even for 5% of all long-distance trucks in Europe to be electric.

For buyers, this will likely mean maintaining their own charging infrastructure at a warehouse base, and using chargers at sea ports--one of the first places that will get attention from EV truck users. This will allow trucking companies to rely on their own chargers in between two endpoints, rather than relying on charging plazas for trucks along autobahn routes, which have yet to be built in any noticeable number.

The eActros uses lithium-iron phosphate cell technology (LFP), which values battery longevity over battery volume, with the truck maker estimating that the eActros will have a life of 1.2 million km, or 750,000 miles, over a period of ten years.

"However, it's not enough just to offer the right vehicles. Our customers also need the suitable infrastructure.

We are active here at a wide variety of levels. For a rapid build-up, it is essential that the entire industry and governments pull together," Daum added.

Mercedes and Volvo may have beaten the Tesla Semi to production by a wide margin, but time will tell just how quick of an uptake the eActros lineup will see. In a few years we may look back at this year and conclude that all of these trucks may have been about half a decade early, given the meager growth of charging infrastructure for trucks.

But the fact that several truck makers now have lineups with multiple models is not something the industry could boast even three years ago.

Jay Ramey Jay Ramey grew up around very strange European cars, and instead of seeking out something reliable and comfortable for his own personal use he has been drawn to the more adventurous side of the dependability spectrum.