It Happened in a Converted Truck 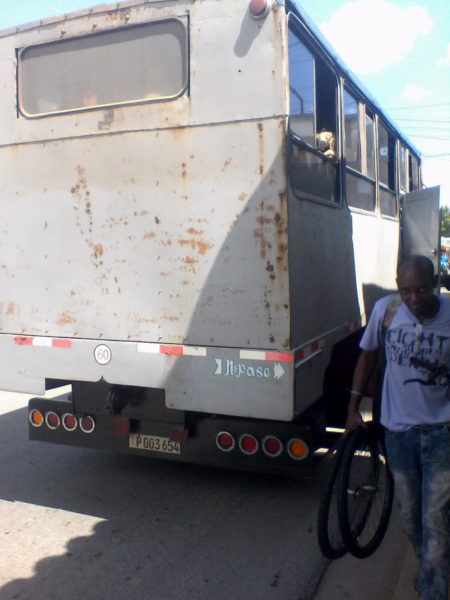 By Pedro Pablo Morejon HAVANA TIMES – The converted truck used to carry passengers, stops a few kilometers from the city. A pair of police officers get on, and file into the vehicle’s interior.

Some of us are asked to get down. I feel very annoyed, not only because of the resulting delay, but also for the sensation of being nothing, of being totally at the mercy of another’s will. From the ground, I watch the search.

I hear them ask about a sack. The owner responds in a low voice, and I see the officer examining two cards he hands over – one, his ID card, and the other, apparently, his license as a self-employed worker as they call the independent economic activities authorized by the government. “What are you carrying there?” they ask a young girl.

She tells them, “Open it!” but they ignore her and get down. Down below, those of us waiting are scrutinized, but not searched. It seems to be a routine check, maybe looking for something specific.

We get back on the truck and it resumes its journey. People express their irritation, rant about the police, but not about the system. Like playing with the leash, but not the monkey.

“This happens to us because we don’t know our rights,” says a man sitting beside me. “What rights?” I ask. “The ones in the Constitution.”

“Have you read the Constitution? Are you familiar with it?” “No, but we have rights.”

“What rights? Tell me…” He was silent, so I added more fuel to the fire.

“The only right we have here is to shut up and put up with being stepped on. “You’re wrong, there are rights here,” a man with intellectual airs joined in. “Could you explain to me which?”

“In what other country in the world do you enjoy the peace and tranquility you have here?” he responded – a question that seemed so absurd that I wondered: “Is he mentally defective or is he pulling my leg?” “Explain that to me,” I insisted.  He then offered me a very stale explanation of the Cuban socialist system, which in his opinion was highly superior to cruel capitalism, justifying everything with the comfortable explanation that a genocidal blockade was the cause of all our disasters. “That’s empty rhetoric,” I point out. “You haven’t explained to me what rights we Cubans have.

To begin with, we don’t even have the right to express ourselves, because…” “You’re doing it now,” he broke in, “and no one is putting you in jail, because you have the freedom to do it. But it’s one thing to express yourself freely, and another to hatch plots,” he ventured.

“Because I’ve earned it, because I’m not waiting for anyone to grant it to me, and because I’m sure that the majority of those listening to us here detest your sickening talk of “the revolution”.  Otherwise, I’d be suffering a hate rally, or maybe they’d have called in the black berets to beat me up like they did on July 11, 2021, or in Nuevitas or in Baracoa, where even some children were bitten by their dogs. And if I have so much freedom to express myself, I don’t understand why you need to highlight it – I have it and period.  And don’t talk about plots. I’m talking to you face-to-face, because I have plenty of balls for that – do you hear me?” I say all that calmly, although my tone of voice and body language almost certainly reflect hostility.

At that moment, I’m poised to confront anything, my self-preservation instinct buried under an avalanche of anger, pride, and indignation. An athletically built man of about 30, in an olive-green uniform with a black beret on his head, is sitting some three yards away, but he pretends not to notice although my voice, at that moment, can be heard throughout the entire truck.  It’s clear that alone they are nothing but defenseless subjects, just like the rest of the Cubans, mere appendages of a totalitarian power. They only repress when they’re in bands and receive a combat order.

My opponent looks around as if seeking a quorum, but there isn’t one, so he decides to retire. Also, I don’t think he wanted to get into a physical fight – he wasn’t ready to face me on that terrain.  The other people observe me. I imagine the thoughts going through their heads:

“That guy’s really crazy.” “He’s an agitator, working for the political police.” “He’s a fool.”

And more. Thoughts appropriate to an enslaved people, who think that being intelligent means bearing up in silence, being a living being with a double standard, and obeying – that is, going with the flow. The truck reaches its destination.

I step down amid the crowd and move away with slow steps. Me, who’s another coward, this time feels like a being in a state of grace. At that moment, I’m not even afraid of God.

Read more from the diary of Pedro Pablo Morejon here.