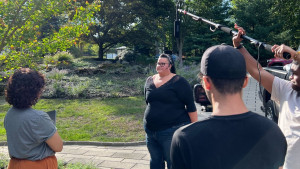 National Truck Driver Appreciation Week has come and gone. But the good work of truck drivers, trucking companies, and commercial vehicle suppliers goes on for 52 weeks a year. We are still catching up on a lot of good works while Five Good Things was on break this year.

Please pass along good news for this space by email.

The Truckload Carriers Association recently named Corey Parker of Kenansville, North Carolina, as a Highway Angel for stopping an overdosing driver who was driving erratically on a busy central Virginia highway.  Early evening on June 21, Parker was driving south of Ashland, Virginia, when he noticed a Lexus sedan traveling recklessly from lane to lane. "They smacked the barrier again and then went out to the middle of the road and then in and smacked the barrier again," Parker recalled. "I thought, something's definitely going on."  The North Carolina native followed the car from Ashland onto the Chippenham Parkway in Chesterfield.

Parker blasted his horn and attempted to slow down traffic to warn travelers of the erratic driver. "I didn't want to pull up right next to it since they were just smacking the barrier going in and out," he recalled. "So I just started going in and out of all the lanes and made sure no cars got on the side."   Fearing the driver would crash into a car full of other people, Parker used his truck to slow the vehicle to a stop against a concrete barrier. "The car slowed down to about 10, 15 [miles per hour] and smacked the barrier," Parker said. "I knew that was the time to get in front of them."  Without hesitation, Parker quickly ran to the driver's side and opened the door and saw a Narcan pen in the driver's lap.

Naloxone or Narcan is used to reverse the effects of a drug overdose. The driver was unconscious. Moments later, the police arrived, according to CBS News 6 in Richmond.

"All I could think of was that car hitting kids or something," Parker shared, explaining why he went to such extraordinary lengths to stop the car. The driver of the Lexus contacted Parker to thank him for saving his life. "I'm in the process of helping him get into rehab," Parker told TCA.   TCA presented Parker with a certificate, patches, lapel pin, and truck decals.

The company also has received a letter acknowledging him as a Highway Angel. Since the program's inception in August 1997, nearly 1,300 professional truck drivers have been recognized as Highway Angels for the exemplary kindness, courtesy, and courage they have displayed while on the job. Read more about Parker's story at the Highway Angel website.

Tank Truck Driver of the Year donation helps others

The NTTC donated in Frain's name to the St. Christopher Truckers Development and Relief Fund, according to WATE in Tennessee. Frain drives for Highway Transport, which is No.

244 on the FleetOwner 500: Top For-Hire Fleets of 2022 list. "The NTTC is pleased to provide this donation to the St. Christopher Truckers Development and Relief Fund on behalf of Mr.

Frain," said William Lusk, NTTC manager of education and government relations. "It's important for us to recognize the leaders in our community while also giving back to those who move our industry forward. Our hope is that this funding will help SCF fulfill its mission to aid drivers and their families during a difficult season." St.

Christopher Truckers Development and Relief Fund's mission is to help over-the-road semi-truck drivers and their families who are out of work due to a recent illness or injury. The nonprofit's assistance can be in the form of direct payment to provide for household living expenses such as rent/mortgage, utilities, vehicle payments, and insurance. It also offers health and wellness programs such as diabetes prevention and smoking cessation.

"We want to congratulate Tom for his well-deserved national recognition and thank NTTC for its support," said Shannon Currier, St. Christopher Fund's director of philanthropy. "There are so many unknowns when a family member gets sick or is suddenly out of work, and these situations leave families stressed and confused on how to proceed with everyday life. Donations allow us to further enhance the health and well-being of semi-truck drivers and their loved ones when an unexpected illness or injury occurs."

Driver advocate's truck gets a makeover

Owner-operator Jess Graham's 1995 Freightliner FLD, which she calls "The Black Widow," was updated as part of the TransFIX My Rig contest for National Truck Driver Appreciation Week. The Transfix-sponsored contest is in its second year.

Atlanta-based Graham told FleetOwner she was grateful to have her request for a desk workspace fulfilled. Along with her own truck-driving business work she does in the cab, Graham also does brokerage work for GTO Trucking; and she is a board member for Real Women in Trucking.  The makeover also included lighting with dimmer switches, skull wallpaper, a refrigerator, and a coffee pot.

The project was led by Jason Cameron, a TV host who has appeared on over 500 episodes of home renovation programs, including DIY Network's "Man Caves" and "Desperate Landscapes" and "Secret Celebrity Renovation" on CBS. See pictures and read more about Graham and the cab makeover here.

The event raised more than £500,000 for several Cape Cod, Massachusetts, charitable organizations. The charity race event featured teams of six drivers of Formula One European-style racing karts who competed in a four-hour endurance race that ran on a quarter-mile outdoor track throughout Mashpee Commons. Team sponsors chose their own teams, and Advantage Truck Group and Robert B.

Our donated their race-kart seats to the Mashpee Police and Fire Departments. This is the second year in a row that the team of drivers from the Mashpee Police and Fire Departments has won the race.  Since 2015, Advantage Truck Group has participated in the Seaside Le Mans charity event and has donated its race kart seats to a team of first responders.

In the 21 years since the race began, it has raised about £9 million for local non-profit organizations across Cape Cod, Massachusetts.

Bendix Commercial Vehicle Systems' manufacturing operation in Huntington, Indiana, was awarded the 2022 Governor's Award for Environmental Excellence by the Indiana Department of Environmental Management for its 1.168-megawatt solar installation that came on line last year.  Bendix accepted the award on Sept.

21 at a ceremony in Indianapolis. Earlier this year, the U.S.

Department of Energy named the Bendix solar effort a 2022 Better Project Award winner in the department's Better Plants program. The annual Governor's Awards for Environmental Excellence is reserved for the most innovative, sustainable, and exemplary programs or projects that positively impact the state's environment and demonstrate measurable environmental, economic, and social benefits. The selection process is highly competitive, and only one award in each of the seven categories is chosen.

"Our goal when we came on line in August 2021 was to reduce Bendix's carbon footprint while also saving costs," said Maria Gutierrez, Bendix director of corporate responsibility and sustainability. "With the installation's help, we're succeeding, as it's meeting about 30% of the energy needs at the massive Plant 1 manufacturing facility on the campus. Beyond that, we forecast it will decrease the carbon footprint of the Huntington operation by 19% and Bendix's carbon footprint across North America by 3%. To be recognized by the home state of our operation is especially meaningful."

Indianapolis-based PSG Energy Group managed the construction of the array. When completed, the array was the largest on-site solar installation in Huntington County. At full capacity, the solar project produces 1.5 million kilowatt-hours of electricity annually, delivering an estimated £140,000 in electric utility savings yearly.

"The solar array is Bendix's first, and it produces electricity through 2,612 450-watt panels," said Bill Schubert, Bendix corporate manager, environmental and sustainability. "During normal hours of operation at the plant, the facility will use all the energy generated.

But during nonworking hours like weekends and holidays, Bendix will be able to send excess energy back to the electrical grid.

This process will increase the utility's green energy and reduce Bendix's utility costs."