The penultimate round of the 2022 Goodyear FIA European Truck Racing Championship is taking place at Le Mans Bugatti Circuit this weekend, with reigning champion Norbert Kiss closing on his fourth series crown 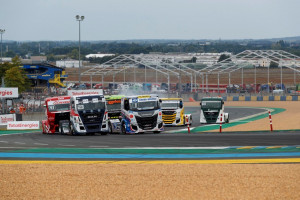 As part of a top-class festival of truck racing, the Goodyear FIA ETRC grid will again thrill the passionate French crowd at the annual 24 Heures Camions event, which features brilliant off-track entertainment including truck show, fireworks, and all of that in a unique carnival atmosphere. With a 68-point lead and eight races remaining, Norbert Kiss is the clear favorite and can seal the title this weekend, with one round in spare. So far in 2022, Kiss has taken at least one race win at each of the events, and all but one pole position.

The Hungarian has also enjoyed successes at Le Mans before, with a double win last year being his most recent achievement on French soil. Still in contention and leading the chase is German truck racing legend Jochen Hahn, who took the second win of his campaign at Circuit Zolder two weeks ago. Hahn, who has been Kiss' closest challenger over the course of this season, took race one victory at Le Mans last time out and will surely be the one to watch this weekend.

Sascha Lenz also scored a win in Belgium two weeks ago, but with an 80-point gap to Kiss, he's only within a theoretical chance of the title. However, the German will be keen to defend his last year's end-of-season runner-up position from his compatriot Hahn. After recording victory number two of the season at Zolder, Adam Lacko will be another driver on the look for more silverware this weekend.

The likes of Antonio Albacete, Steffi Halm, and Andre Kursim will all want to seal good results at Le Mans to finish off their season on a high.

Joining the ETRC grid at Le Mans is John Newell in his #18 MAN truck.

Newell is a regular podium finisher in the British Truck Racing Championship.