Driver is hailed as a hero for saving the lives of 27 schoolgirls while badly injured after bus collided with truck: 'The captain going down with the ship'

By Sam McPhee and Max Aldred For Daily Mail Australia

The driver of the bus that was barreled off a highway carrying 27 private school girls has been hailed a hero for saving their lives.

Students and four staff from Loreto College, Ballarat, were travelling along Victoria's Western Highway in the early hours of Wednesday morning when their bus slowed to avoid a crash and before being struck by a truck.

The vehicle rolled down an embankment just after 3.20am but there were no deaths in large part thanks to the bus driver's heroic actions.

Trevor Oliver, owner of the tow truck company that attended the scene, told the ABC the driver ensured every girl was safely out of harm's way despite being injured himself.

'How he survived is amazing. He refused to go to hospital until every girl had left that accident scene,' he said.

'It was like the captain of the ship going down.'

Mr Oliver was helping clear debris at another crash nearby when he heard 'three horrendous bangs' during the horror smash.

He raced to the scene and helped free the schoolgirls, who are in years 9 to 12.

The tow truck operator revealed one of the girls had to have part of her leg amputated.

'Three of us got hold of her... we got her free and carried her out,' he said.

'(I) was just trying to calm her down, grabbing whatever we could to wrap her leg, because we were conscious of her bleeding.

'It just seemed like an eternity to get enough ambulances there.'

Kangaroo Transport Industries chief executive Steve Buck said the 60-year-old driver was a sub-contractor 'who has been safely driving road trains for more than 30 years' and needed surgery after being trapped in the cab.

The school bus, carrying 27 students and four teachers, rolled 50m after it and a truck collided in the confusion of a previous truck crash (pictured, emergency services at the scene)

The Bus Association of Victoria believes seatbelts played a major role in saving the lives of those on board after most had buckled up.

'It looks as if there were some who weren't, but it was a seatbelted coach and the majority were wearing them,' executive director Chris Lowe told The Guardian.

'The whole circumstance could have been a lot worse if it was not seatbelted.'

Police said it was 'miraculous' all those on board were able to pull themselves from the wreckage and survived the crash.

'Quite miraculously, they've self-evacuated and other people, I believe truck drivers and that, stopped to assist them,' Detective Inspector Roger Schranz said.

'I would have assumed someone would have passed away out of this entire tragedy. So they're all very fortunate.'

'How anyone wasn't more seriously injured is incredible,' he said.

Three of the teenagers flown to the Royal Children's hospital remain in serious but stable conditions.

A woman in her 40s and a man in his 50s remain in Royal Melbourne Hospital in a stable condition.

All others on board were taken to various hospitals for observation on Wednesday. 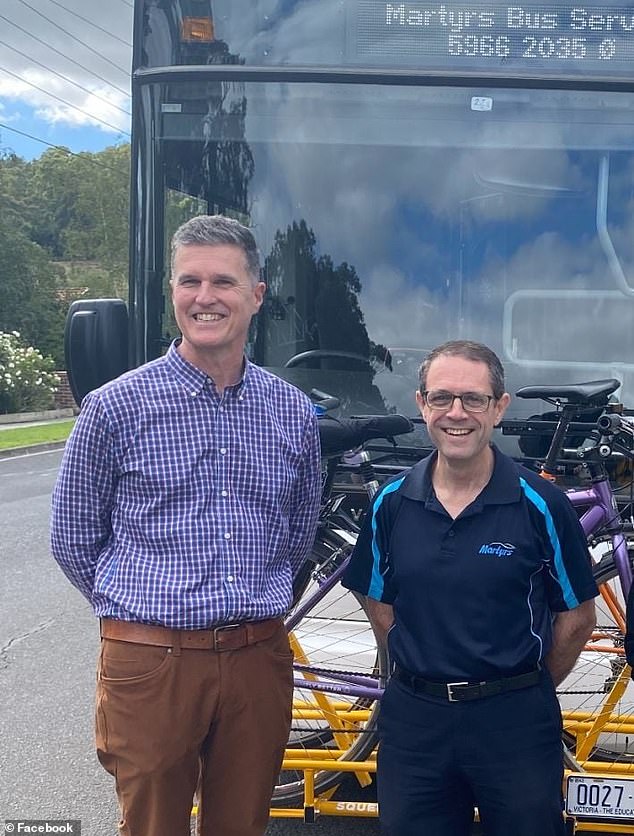 Executive director of the BAV, Chris Lowe (pictured left) said most students had been wearing seabelts on the bus, a decision which may have saved many lives, as police were relieved to find there had been no casualties on scene

Speed limits at the time of crash were reduced following a collision the previous night.

Loreto College is staying open to students, parents and teachers on Thursday's Day of Mourning public holiday so they can access counselling.

The exciting US trip the students were heading to included six nights at the NASA space camp, two nights in Washington, a tour of the US Capitol, lunch with an astronaut and an airboat tour through the Florida Everglades.

The excursion, which cost £7,700 per student, was previously cancelled because of Covid restrictions.

The distraught mother of one of the students took to a private local social media group to explain her daughter was physically okay, but rattled by the incident.

The mother had cancelled her own international trip but cancelled the flights immediately to remain with her daughter.

'I wanted to say how Jetstar has softened the blow of what as been an horrific day for my family,' the mother wrote.

Victoria Police Detective Inspector Roger Schranz (pictured) said the truck driver, who was seriously injured, collided with the bus because traffic had built up from a pervious crash

'We were on our way to the airport separately, for our trip to Bali, when we learned how serious the crash was.

'While she is ok physically, it has been very traumatic with many of her friends air lifted or sent via road ambulance to hospital.'

The mother then said she wanted to 'give credit where due' to the airline for their help and reminded parents to 'please give your loved ones an extra squeeze'.

Witness to the collision Trevor Oliver, who works for a towing company, told Seven News he was about 800m up the road when he heard three loud crashes.

Mr Oliver raced to the scene and was shocked when he saw injured children, between Year 9 and 11, spilling from the bus and onto the grass.

'Instantly your heart sinks, but then to get there and find students, (it's) another world,' he said.

Mr Oliver said he ran down the embankment and, with the assistance of others, took the driver's windscreen off to allow some of the girls to climb out.

He then saw one girl whose leg was almost completely separated from her body. 'Three of us got hold of her ... we got her free and carried her out,' he said.

The truck and car collided (location pinpointed) in Bacchus Marsh, in Melbourne's north-west, at 3.15am on Wednesday

'(I) was just trying to calm her down.

Grabbing whatever we could to wrap her leg because we were conscious of her bleeding.'

He then gave the students his phone so they could call their families.

Mr Oliver used to work with the Country Fire Authority and has dealt with trauma before, but acknowledged it never gets easier.

'The college is very appreciative of the quick and professional response of the emergency services personnel at the scene and very grateful to Grampians Health for their ongoing support,' the statement said.

'Our caring Loreto community has deep concern for the injured and their families and we ask for their privacy to be respected.

We thank you for your understanding.'

The Melbourne-bound lanes of the Western Freeway between Ballan and Bacchus Marsh have since re-opened.

Major collision unit detectives are investigating the exact circumstances of the crash.