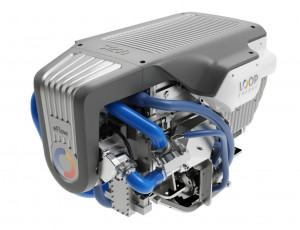 Vancouver based Loop Energy, a developer and manufacturer of hydrogen fuel cell solutions, has unveiled its landmark 120 kW fuel cell system for deployment in the commercial mobility space. This significant new product has the potential to revolutionize commercial transport by achieving fuel cost parity with diesel. The 120 kW fuel cell system, the S1200, represents Loop Energy's second generation of its eFlow bipolar plate technology and provides an additional efficiency gain of 20%.

The S1200 can deliver up to 60% in net system efficiency while maintaining overall high fuel economy over a wide band of power demand. In the words of president and CEO of Loop Energy Ben Nyland: "At the core of Loop's eFlow technology is a signature trapezoid plate design. Unlike legacy fuel cell systems, this design ensures improved uniform current density across the entire active area and increases gas velocity throughout the plate to deliver superior performance and water management."

At the same time, London based, electric and hydrogen truck OEM Tevva unveiled its 19t Class 8 hydrogen-electric truck designed for the European market. Tevva's 19t hydrogen-electric model benefits from the company's revolutionary dual energy system, combining lithium-ion batteries and a Loop' Energy hydrogen fuel cell range extender. The truck is expected to have a range of up to 400km.

The partnership between Tevva and Loop Energy was originally based on the 7.5t, Class 5, commercial delivery vehicles. Now the companies are set to deliver a disruptive offering in the heavy duty class ahead of many established OEM's struggling to compete against diesel internally. Tevva is well-poised to compete with the Hyundai's fuel cell XCIENT line of trucks deployed in 2020 in Switzerland.

XCIENT is powered by two 95 kW fuel cells. It seems that companies, not tied to their customers and traditions are able to lead the market in offering clean technologies.

While Tevva was covered in a recent article, it was a long time goal to learn about Loop Energy. What follows is a profile of Loop Energy based on discussion with Ben Nyland.

Company was formed circa 2000 in Vancouver, BC, Canada, where it maintains its headquarters, research, and manufacturing. In 2021, it received 19 fuel cell orders from 10 global customers and anticipated tripling production each year going to 180 in 2023. However, since interest in clean transportation is booming, 60 fuel cells were sold by June resulting in 100 and 500 fuel cell orders in 2022 and 2023, respectively.

This is essentially a 25 fold growth as hydrogen becomes a strategic fuel due to energy challenges in many markets. Loop Energy has recently established a manufacturing facility north of Shanghai to advance its Chinese market; a support and distribution center in London to provide strong footing for its biggest customer Tevva and the European market; and a sales office in Milan. The company relies on 120 employees globally with one-third dedicated to manufacturing.

Historically, on the manufacturing side, Loop Energy has concentrated on assembling components into the final product; yet recently, it had started to vertically integrate the flow (or bipolar) plate manufacturing for its new product line of fuel cells. The flow plate design is the company's most important intellectual property. To successfully introduce its products to potential customers, Loop energy has established a separate internal group, Global Technical Services, with responsibilities to work with sales toward understanding the customer technical requirements in order to deliver a product that meets those expectations.

This group also executes the Customer Adoption Cycle which consists of three phases. The first phase starts with deploying a single unit and allowing the customer to test on a "bench" or evaluate in a mule vehicle. The Global Technical Services group works very closely with the customer to make sure the deployment goes successfully.

In case of Tevva, Loop won against three other finalists with integration into the mule vehicle which was running in a day and a half. The second phase concentrates on the scale up with about ten or so vehicles. It also involves a commercial deployment.

The success story in phase two is the Skywell New Energy Vehicles Corp bus company in China where 10 fuel cells were integrated over the course of two weeks and going in service as a municipal bus in May 2021. What is more remarkable, due to the Covid lockdown in China, all support was provided remotely. The third phase is commercial deployment, like Tevva's, where the company has decided to establish a distribution center to both grow the business and provide dedicated support for its first commercial customer in phase three.

As the fuel cell market develops, so do new products and innovation at Loop Energy. It now offers products with its second generation of eFlow technology, which consists of narrowing channels that improve current generation across the fuel cell surface, while speeding up the flow of reactants and products such as water vapor. During the fuel cell reaction on the cathode side, oxygen is removed from the air and the remaining nitrogen absorbs the water vapor generated from oxygen and hydrogen.

The situation on the anode side of the fuel cell, where hydrogen is reacting, is slightly different. Hydrogen there is dead ended under pressure and escapes across the membrane on the cathode side. As a result of the eFlow innovation, the efficiency is improved by up to 20% resulting in million dollars of savings in fuel costs in fleet operation.

This platform will also allow Loop Energy to go toward 200-300 kW for future customers as well as more demanding deployments.