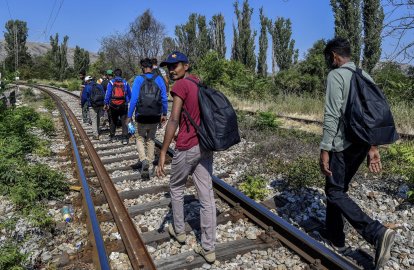 According to AP, police said the detainees were mostly from Syria and Pakistan and were taken to a shelter pending deportation to Greece. Unlike North Macedonia, Greece is a member state of the European Union. More than 11,000 people -- mostly from Pakistan, Syria and India -- have been stopped this year, according to AP.

They usually pay criminal gangs to be smuggled through the Balkans to central and western EU countries. Also read: North Macedonia: Police discover 87 migrants in truck

Reported violence on the Balkan route

Earlier this week, NGO Save The Children published a report claiming that on the so-called Balkan route, minors were suffering "horrific violence" including electric shocks and beatings with sticks. Border police and smugglers are the most common perpetrators, according to the report.

North Macedonian police said the Balkan route for migrants has become more active in the past few months, after a lull caused by the COVID-19 pandemic and stricter border controls. According to AP, the number of people entering North Macedonia irregularly has doubled so far this year compared to the same period in 2021. The European border agency Frontex also recently reported a considerable increase in irregular entries into the EU from the Western Balkans.