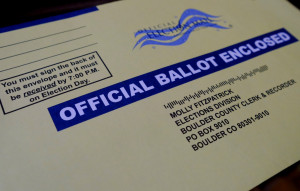 Boulder County residents will vote on three tax measures this November that officials say are critical to public transportation, wildfire mitigation and emergency response efforts. At their regular meeting Thursday, the Boulder County Commissioners approved putting all three questions before the voters during the Nov.

8 election. The county's current 0.10% transportation sales tax sunsets in June 2024 and local officials have maintained that if voters do not extend it, the county will have to cease many of its existing transit services and mobility programs.

Ongoing trail work and multimodal transportation projects would also have to be "dialed back" in order for the county to focus on basic maintenance of its existing roads," a staff memo said. Several public commenters, many of whom worked with older adults and disabled veterans in Boulder County, implored the commissioners to place the tax question on the ballot, saying their clients relied on the very services it would fund. "I just want to say how excited I am about this tax extension," Boulder Mayor Aaron Brockett, who was speaking in his personal capacity, said during Thursday's public hearing. "This is just so critical to our mobility future here in Boulder County."

The county's existing transportation tax, which has been in place since 2001, has paid for more than 97 miles of paved road shoulders, 13 intersection safety improvements, 23 miles of regional trails, nine transit routes and six new pedestrian underpasses. Revenue generated from the tax extension would go toward maintaining and improving the county's existing transportation infrastructure and would also be used to leverage even more state and federal grant dollars for local projects. "It's important for the public to understand that funding transportation is not optional," Commissioner Claire Levy said. "It serves all of us."

In addition to the transportation tax, commissioners voted to put two more 0.10% sales tax questions on the November ballot -- one for wildfire mitigation and another for emergency response efforts. A 0.10% sales tax is equivalent to one penny on every ten dollars. The wildfire mitigation sales tax, which is estimated to generate up to £11 million in its first year, will go toward strategic forest and grassland management, protecting water supplies and fostering "resilient ecosystems," according to the ballot language.

"This is a need that will be ongoing. It is not going to end," Levy said. Unlike the transportation and wildfire mitigation tax measures, the emergency response sales tax would decline to .05% after five years.

During Thursday's meeting, representatives with the all-volunteer organization Rocky Mountain Rescue Group said that their calls for service had continued to rise as had their expenses. One wireless radio was said to cost the search-and-rescue outfit £2,000 per member. The wildfire mitigation and emergency response tax measures will go before voters less than one year after the Marshall Fire destroyed more than 1,080 homes in Boulder County.

"There is no doubt that wildfire mitigation is critical," Commissioner Marta Loachamin said. "It has been for a really long time and our eyes have been opened unfortunately due to some ... significant tragedies." While many public commenters favored all three tax measures, some thought the language in the emergency-response ballot questions was too broad and not well thought-out. However, aside from replacing the word rebate with "financial assistance" in the wildfire mitigation tax measure, commissioners approved questions as presented.

"This is so critical both for the mountains and for the plains," Commissioner Matt Jones said. "It's just a new time.

It's climate change, and we learned that the hard way in Marshall (Fire)."