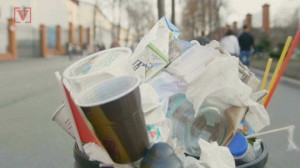 Here's the case for going zero waste Zero waste advocates say making the switch is an easy process that just requires a few simple steps that could dramatically change the environment in the long run. Lindsey Granger has the story.

Buzz60, Buzz60 Hey Gainesville, banning plastic straws isn't enough!   Around the University of Florida, there are many food trucks and farmers markets where students are able to hang out, explore and enjoy the Florida weather.

Food truck parks such as 4th Ave Food Park and Midpoint Eatery have become staple spots close to campus for students to grab a quick bite with friends. Farmers markets like Haile Farmers Market are a fun Saturday morning activity for students as well. I know my friends and I have commonly stuck around the food truck park to do schoolwork at the picnic tables, or gotten a bite from a stand at the farmer's market as we explore the other local businesses. It is common practice for these food trucks and farmer markets to provide single-use dishware when you purchase food or drinks, but seeing as most students like to enjoy their meal before leaving the park or market, I believe it's time we change this unnecessary and commonplace system.

While the city of Gainesville has continued to make strides in reducing single-use plastic over the years, in line with it Zero Waste initiative, it have yet to explore more drastic options. In January 2020, the City Commission passed an ordinance that banned single-use plastic straws in food service. Most recently and coming into effect in September, food service establishments will not be allowed to provide single-use plastic accessories unless requested by the customer.

This would ban items such as utensils, condiments and portion cups. While the steps the City Commission has taken thus far have been in the right direction, I propose a new ordinance be taken into consideration: an ordinance that requires the implementation of a deposit-return scheme (DRS) system in food trucks and farmers' markets in Gainesville.    DRS systems have shown to be a successful and a key way to reduce single-use packaging.

The reduction of single-use packaging is vital in decreasing pollution. Statistics show that if properly implemented, the DRS system can reduce drink containers in the ocean by 40% and minimize CO2 emissions by 50%.    The system is simple: When you purchase a food or drink item the establishment charges you an extra small amount for the dishware they provide you.

Then, upon return of the dish, you receive this extra payment back. Since this is a foreign concept to the majority of students, it will take some getting used to. But the implementation of the DRS system in many countries across Europe has proven to be successful.

By their second year, 90% of drink containers were returned. Lithuania is proof that once the general population understands and adapts to the system, its impact is undeniable.   As Gainesville city commissioners are continually passing new ordinances in accordance with their Zero Waste initiative, they should start a conversation about the DRS system.

Similar to their most recent ordinance, they could require food service establishments to serve food in reusable glasses and dishes unless otherwise requested by a customer. There is really no excuse as to why cities in America cannot follow Europe's lead in opening the discussion about the DRS system. A nationwide poll conducted earlier this year among registered voters found that 81% of Americans, regardless of party, support national, state and local legislation to reduce single-use plastic.

It is clear that the public supports initiatives like these, so we need to encourage our government both national and local to initiate change.    So, how do we get started? Local businesses would need to make the initial investment to purchase reusable dishware, whether that be plates or glasses or both depending on their services. When a customer makes a purchase, the business is at liberty to charge what they like for the reusable dish.

I believe a fee of £2 for a glass cup and £3 for a plate would be most effective. The system has proven to work better (i.e.. higher return rates) when there is a substantial enough upfront cost. The benefit of charging more also allows businesses to restock on dishware that is not returned, with no little or no cost to them.

Customers are then free to take the dishware where they like, whether that be to sit and eat or to explore neighboring stands. Once the customer is finished with their dishware, they simply return the glass or plate to the business and receive the initial fee back. Therefore, the system causes no extra cost to the consumer if used correctly, and greatly encourages the reduction of single-use packaging.

Not only does the system benefit the environment, but businesses will find it benefits them financially. While the cost of single-use packaging is initially cheap, the use of it over time can prove to be costly  In fact, when assuming a business will accommodate 300 customers a day, the price of their single-use cups can amount to £28,470 annually.

When you see that kind of number, the initial investment of £780 to purchase 300 reusable cups no longer seems so daunting.  The most difficult aspect of implementation would involve the washing of said dishware. Luckily, Gainesville and neighboring communities host commercial kitchens where owners can pay hourly to use their dishwashers if need be.

Even when calculating in the cost of renting kitchen space for cleaning dishes, businesses could save up to £23,675 annually on single-use plastic cups.   In a city like Gainesville where many of its inhabitants are already concerned about single-use packaging and are interested in ways to reduce it, an implementation of the DRS system would see success. Gainesville has already begun passing legislation to reduce waste, so let's continue to lead in our sustainability efforts by taking this next step.  Avery Richey is a nursing major at UF.

Share your opinions by sending a letter to the editor (up to 200 words) to [email protected].

Letters must include the writer's full name and city of residence. Additional guidelines for submitting letters and longer guest columns can be found at bit.ly/sunopinionguidelines.

Get a digital subscription to the Gainesville Sun.

Includes must-see content on Gainesville.com and Gatorsports.com, breaking news and updates on all your devices, and access to the eEdition.