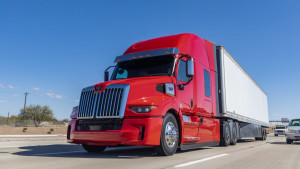 Class 8 truck orders in July resembled popular concert tickets the day after they are sold out. No one orders any. The analogy by Don Ake, vice president of commercial vehicles for FTR Transportation Intelligence, captures the situation and the sentiment surrounding new equipment.

Parts and components availability is improving. But it is not equal to the pent-up demand for tractors. "OEMs could increase production by about 10% over the current rate if they could get the parts, but the supply chain remains clogged," Ake said.

The 2019 numbers cratered because of pull-ahead orders a year earlier that resulted in more than 50,000 orders in consecutive summer months as fleets tried to spend windfall proceeds from a federal tax cut.

No booking bonanza in site

Now three years later, no such booking bonanza is in sight -- at least until manufacturers open their 2023 orderbooks. The OEMs won't do that until they can read what will happen with supply chain disruptions and commodity price inflation. Quiet understandings between manufacturers and their biggest customers are occurring, especially for fleets committing to multiyear deals.

"When booking commences for 2023, possibly as early as September, Class 8 orders could reach record heights," Ake said. At the bottom of the funnel, deliveries have improved in recent months. But the long slog of supply chain disruptions takes a toll.

"We believe that because of supply constraints retail sales of Class 8 trucks have lagged demand by as many as over 100,000 trucks the last couple of years," William "Rusty" Rush, CEO of Rush Enterprises, told analysts on a second-quarter earnings call on July 27. "This pent-up demand for Class 8 truck sales and the pending changes to emissions guidelines in 2024 and 2027 [mean] the commercial vehicle market will remain strong through 2026," he said. Rush operates the nation's largest network of new and used truck dealerships and accounted for 6.4% of the total U.S.

Sold out of build slots

Manufacturers are effectively out of build slots for the rest of 2022, FTR said, echoing remarks of Paccar Inc. CEO Preston Feight on a July 26 conference call with analysts. "We're sold out for the year and the first quarter [of 2023] is beginning to fill in nicely," Feight said of the company's Peterbilt, Kenworth and European DAF Trucks brands.

Manufacturers overcommitted on order taking in 2021 and had to cancel thousands of orders late in the year. To avoid a repeat, they are matching orders to what they know they can build and deliver. Slowing freight markets are wiping away some of the froth, but underlying demand is strong.

"Despite the economic uncertainty, demand for new trucks is expected to remain robust in 2023," Ake said. ACT Research pegged July Class 8 orders at 11,400. It raised the question of whether demand will hold up as freight rates fall, pushing more truckers to surrender their authorities and fill seats at for-hire fleets.

"Recent spot rate weakness, and our expectation that a freight recession is inbound, would suggest yes," said Eric Crawford, ACT vice president and senior analyst. But he quickly added: "We hesitate to extrapolate too much from a data point that could prove to be an outlier. To be sure, though, it is a data point that warrants increased vigilance going forward."