California: Plane crashes into pickup truck on freeway in Corona and bursts into flames 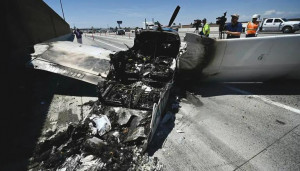 A small single-engine plane on Tuesday crash landed on Corona freeway 91, hitting a truck carrying people. Soon after the dramatic landing, the Piper Cherokee burst into flames, leaving a trail of fuel as it slid toward the barrier of the eastbound lanes near Lincoln Avenue. The bizarre moment was caught on the dashcam of the California Highway Patrol.

Fortunately, the pilot and passenger escaped safely from the ill-fated plane about to crash on the California highway. In addition, the people in the truck that the plane dashed against remained unharmed. Speaking to regional news channel KTLA, CHP Captain Levi Miller said that the pilot claimed to have "experienced possible engine failure" during descent to Corona Municipal Airport.

Meanwhile, pilot Andrew Cho explained that he decided to land the small craft amid the busy highway after it lost power mid-air. "It felt like a hard bump...very hard to describe.

4 to 5 feet in the air when the plane stalled completely and began free fall," the pilot said. Noting that no lives were lost in the crash, he added, "Your training kicks in and you do the right thing. As long as you don't panic you get the best outcome."

The Federal Aviation Administration is expected to launch an investigation into the "successful" crash landing, KTLA reported.

Meanwhile, Capt. Miller hailed the pilot for "good landing navigation." However, he added that "we were very fortunate today that the traffic was light...that avoided what would have been a bad tragedy." The heart-stopping dashcam footage of the incident shows how the small engine plane descended from the sky vertically right in the middle of the road and then skidding off towards the barricade, finally hitting the truck.

The sliding plane left a trail of jet fuel behind. The plane burst in flames after it hit the curb. CHP officials reached the spot as plumes of thick smoke engulfed the area.

Firefighters deployed at the site rained water to douse the enkindled aircraft. Photos and videos went viral on social media showing charred remains and debris of the small plane after first responders fizzed out the fire. In the wake of the incident, the highway was shut down for hours, causing traffic delays.