After A Disappointing Summer Of Air Travel, US Proposes Stricter Rules For Airlines 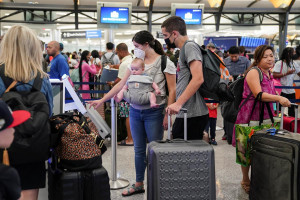 The U.S. Department of Transportation proposed a new rule on Wednesday which will help travelers who are seeking refunds for airline tickets. This new rule comes after a busy and chaotic year for airlines that had trouble meeting demand.

Over the summer, airlines also struggled to find workers, including flight attendants and pilots. Effectively, they could not meet consumers' demand. These disruptions caused many travelers to change their plans or not fly.

The department requires airlines to refund cancellations or significant changes. However, the current rules do not define the terms. So, airlines can skirt the rules and not reimburse travelers for such expenses.

As a result, the DOT received "a flood of air travel service complaints" from air travelers with non-refundable tickets. Travelers complained that the airlines significantly changed or canceled flights. Waves of COVID-19 case numbers that ebbed and flowed along with the rise of new variants also hindered travel.

"Since the start of the COVID-19 pandemic, various airlines have questioned the Department's authority to require refunds for flights airlines cancel or significantly change," a news release read. With the recent news, Transportation Secretary Buttigieg previously said he may force airlines to work in consumers' interests. "This new proposed rule would protect the rights of travelers and help ensure they get the timely refunds they deserve from the airlines," said Secretary Buttigieg.

Simply put, the proposed rule codifies the DOT's interpretation of "cancelation" and "significant change." A cancellation would be any flight "published in a carrier's Computer Reservation System" when a traveler purchased a ticket, but never flew. Significant changes in the proposed rules affect departure and arrival times. That means at least three hours for a domestic flight and six hours for an international flight.

The proposed rule identifies changes in departure and/or arrival and adding connections. A change of aircraft type would also qualify as a significant change. Under the proposal, airlines would offer "passengers flight credits or vouchers that are valid indefinitely" for pandemic-related travel disruptions.

Those airlines that received significant government aid during the pandemic would have to refund tickets instead.

Passengers with a baby use a Delta Air Lines check-in kiosk at Hartsfield-Jackson Atlanta International Airport ahead of the Fourth of July holiday in Atlanta, Georgia, U.S., July 1, 2022. Photo: Reuters / ELIJAH NOUVELAGE