What women truckers can tell us about living and working alone

This story is adapted from the latest episode of Rough Translation. Listen on Apple Podcasts, Spotify or NPR One. Jess Graham had a plan.

And she was ready to put it in motion. So she got behind the wheel of her new 18-wheeler and drove to the house she once shared with her ex-partner. It was 2010.

In her wallet she had the tens and twenties in cash she'd squirreled away for years and a freshly issued commercial trucking license. And in the cab of her truck, there was a vacant bunk reserved for someone special: her ten-year-old daughter Halima. "I came in, packed her up, went to the school, told her that she is no longer enrolled, and we hit the road," Graham says.

For the better part of a year, Graham and Halima lived in the truck. Listen to this story's podcast episode Listen o 31:48

Graham had never considered trucking as a profession before, but she knew she had to put miles between herself and her daughter's father, who Graham says was verbally and financially abusive to her throughout the course of their romantic relationship. Graham says she tried to make life on the road exciting for her daughter, enriching even. "[There were] certain things we did in survival mode that I turned into a game," Graham remembers.

Halima would roller skate around the truck stop parking lots where they took their breaks, and charm truckers in the driver's lounge into handing over the TV remote so she could watch the Disney Channel. The daily responsibilities of a long-haul trucker became learning opportunities. Halima studied geography whenever the pair crossed state lines, or made pit stops at historical sites and practiced math by budgeting for their meals each day.

In the absence of a chalkboard, Graham taught Halima long division using an unlikely scratch pad. "We've had dry erase markers, where she's just writing down the windshield a math problem that she's struggling with. And so we're walking through it together... as I'm driving down the road," Graham says.

Jess Graham's situation - home and school and work within the confines of an eight-square-foot truck cab - might have seemed extreme a decade ago. But these days, many of us have become accustomed to our work selves, family selves and social selves coming together in a single space, like mother and daughter crammed into the tractor of an 18-wheeler. Or we've become familiar with spending entire days working from home, alone.

That's especially true for women, whether in trucking or in many other male-dominated work environments, who often don't enjoy the camaraderie of their counterparts and feel cut off from their family networks. "I think I was ahead of the curve on it," Graham remarks with a laugh. As part of the series @Work, the NPR podcast Rough Translation spoke with truck drivers about what it's been like for them to experience life on the go in the small spaces they call home. Their stories of loneliness and liberation, isolation and belonging, all playing out in the cab of a truck, tell us something about remote work in all our lives: how we can use alone time to figure out who we really are and what we really want.

Truck drivers spend a lot of time alone - just like a lot of us lately - and they've learned how to utilize every second of it to solve problems big and small.

Brandie Diamond describes herself now as a "transgender truck driver/chef/Jill-of-all-trades." But her career in trucking began in the mid-1980s, and she hadn't come out as trans back then. Diamond remembers the macho heroics portrayed in classic trucker films like "Smokey and the Bandit" or "High-ballin,'" and country music crooners like Dave Dudley and C.W. McCall singing about shiny Kenworth trucks and diesel and C.B. radios. "Truck drivers were like bandits of the road!" Diamond exclaims. "I just felt bigger and badder than anyone else because I could drive a truck."

Diamond was drawn by the masculinity she saw in the industry, but as time dragged on, she found herself becoming a person she didn't recognize. "You become a super truck driver. You tell dirtier jokes to people. You don't really mean them, but after you tell them, you're like, why did I say that?

You're trying to do your best so that people don't see who you really are." Diamond faced a choice: keep pretending to be as "big and bad" as other drivers, or interrogate that persona from the quiet of her cab. She chose the second option, and that decision would change her life.

Truck drivers have a term of art to describe this ability to be alone and think: windshield time.

Scout, Brandie's cat, walks on the dashboard of the truck while they are parked.

"That's how much time that you're sitting behind the wheel, looking out that windshield and seeing what's out there in the world," Diamond says. "Just giving you time to think and settle down."

Diamond says she's used her windshield time to cast herself in her favorite movies, figure out how she'd play a song on guitar and dream up new recipes to cook. And, Diamond used windshield time for introspection: to explore her identity as a transgender woman. So she made a plan in the cab of her truck: that one weekend, she'd dress in women's clothing and venture out to a convenience store for the first time.

That decision led to coming out as trans and changing her name and pronouns in 2015. The idea of windshield time doesn't require an actual windshield. The solitude of remote work will do.

Earlier this year, The New York Times interviewed 30 sources who said that working remotely allowed many trans people the flexibility and privacy to prioritize their transitions. And NPR recently chronicled other big changes remote workers have made since the beginning of the pandemic - from reinventing themselves to demanding a better work-life balance.

For Jess Graham, windshield time gave her the courage to expand her world, and turn isolation into community. Her daughter Halima stopped the ride-alongs when she entered middle school.

By then, Graham had saved up enough money to buy them a house in Washington state, and hire a friend as Halima's live-in nanny while Halima went to public school. Graham hit the road again, this time alone. But she found that the industry was a much less hospitable place as a single woman without her daughter in tow. "You get that attitude from a lot of men: Why are you out here?

You should be home with your kids," Graham says. She says she began to avoid other people. "When we see another woman out here, we tend to stick to ourselves. It's easier to just keep our head down than it is to interact or make waves."

Graham says she couldn't even go to grocery stores or family parties without feeling overwhelmed. She stopped telling friends when she'd be in town. This went on for almost a decade. "I've kind of lost all of those normal daily routines that most people do."

Brandie plays video games in the cab of her truck.

She often plays virtually with her daughter.

Graham knew she had to make a change. "I was really feeling alone, but I was looking for my group, that core friend base that almost everybody has to encourage them and help them through. And that's when I found them." She discovered Real Women In Trucking, an organization that advocates for sexual assault awareness training for new drivers in trucking schools and on the road.

"A lot of the people there had the same experiences I had, and instead of letting it chew them up and spit them out, they banded together to make change," Graham says. Today, Graham is a board member of Real Women In Trucking, and last year she won the Trucking Industry Trailblazer award at the group's annual Queen of the Road ceremony. Apart from her volunteer work, Graham has become a kind of isolation consultant during the pandemic, frequently calling up her mom, who lives alone, and her dispatcher, who began working from home for the first time, to keep them company.

"I think I'm able to talk to people now about what we're all experiencing, the uncomfortable silences, because I've been able to really embrace them. And instead of letting them eat me alive, I've used them to discover who I am and what I want and how I want to be."

A spice rack is displayed in the cab of Brandie's truck. She has been studying culinary arts on her off days.

Doing what you love can be hard when you're feeling trapped by circumstance.

Brandie Diamond, the transgender truck driver who came out in 2015, had wanted to be a chef for years. Her trap? Culinary school was in a fixed location, but she was always on the move.

She actually figured trucking might prepare her to be a chef since cooking and trucking are actually pretty similar: you have to follow a route or a recipe, keep a clock in your head, and get to where you're going - or the dish out of the oven - on time. She imagined a future as a successful chef in a demanding kitchen. So she enrolled in culinary school, back in 2010.

It didn't work out. Between the long commute to campus and the cost of tuition, Diamond had to withdraw. But she didn't give up.

On evening rest stops, she'll park at a Walmart, purchase ingredients inside the store, and come back to the truck to complete her assignments - taking step-by-step photos of the intricate meals she's making and describing them for her instructors. And the next day, she'll clock in to her trucking job and roll out once more. Diamond says she doesn't plan to quit trucking after she graduates culinary school this year. "Hey, I might end up in a food truck.

I don't know. I haven't made those decisions yet, but I have that tool in my toolbox." For now, Diamond says it's the pride of graduating, finishing what she started more than a decade ago, that drives her, not what comes after. "Cooking is my passion." And her kitchen has wheels. 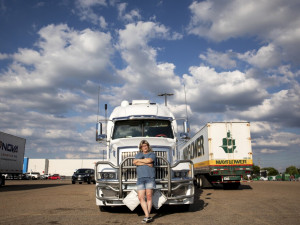 Brandie Diamond has been driving a truck over 30 years.

Currently, she and her wife live in the truck that they drive together.

Gregory Warner contributed to this story.