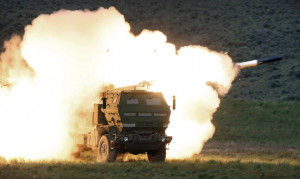 KYIV, Ukraine (AP) -- The Ukrainian military used a U.S.-supplied precision rocket system to deliver a morale-lifting knockout punch Wednesday to a bridge Russia used to supply its forces in an occupied region of southern Ukraine.

Ukrainian artillery struck the Antonivskyi Bridge late Tuesday, the deputy head of the Moscow-appointed administration for the Kherson region, Kirill Stremousov, said. The bridge, which crosses the Dnieper River in the southern region, was still standing Wednesday, he said.

However, holes in its deck prevented vehicles from crossing the 1.4-kilometer (0.9-mile) span, Stremousov said. After previous Ukrainian attacks damaged the bridge last week, it was closed to trucks but remained open for passenger vehicles until the latest strike.

A spokesperson for the Ukrainian military's Southern Command, Nataliya Gumenyuk, told Ukrainian TV that "surgical strikes" were carried out on the bridge.

The HIMARS have a longer range, much better precision and a faster rate of fire compared with the Soviet-designed Smerch, Uragan and Tornado multiple rocket launchers used by both Russia and Ukraine.

Ukraine's presidential advisor Mykhailo Podolyak, said on Twitter Wednesday that "occupiers should learn how to swim across" the Dnieper River or "leave Kherson while it is still possible." "There may not be a third warning," Podolyak tweeted.

Billions of dollars in Western military assistance have been crucial for Ukraine's efforts to mount an ongoing defense following Russia's Feb.

24 invasion, but officials in Kyiv say there are still few weapons to turn the tide of the war.

While halting traffic across the bridge, at least temporarily, makes only a slight dent in the overall Russian military operation, the strike showed Russian forces are vulnerable and was a minor triumph for Ukrainians.

The bridge is the main crossing across the Dnieper River in the Kherson region. The only other option is a dam at the hydroelectric plant in Kakhovka, which also came under Ukrainian fire last week but has remained open for traffic.

Knocking the crossings out would make it hard for the Russian military to keep supplying its forces in the region amid repeated Ukrainian attacks.

Early in the war, Russian troops quickly overran the Kherson region just north of the Crimean Peninsula that Russia annexed in 2014. They have faced Ukrainian counterattacks, but have largely held their ground.

The accurate targeting of the bridge contrasted with Russia's indiscriminate shelling of civilian areas since the invasion five months ago.

The governor of Dnipropetrovsk, in the central eastern area of Ukraine, said Wednesday that Russian forces struck two regions with artillery.

Gov. Valentyn Reznichenko said that in the town of Marhanets, a woman was wounded and several apartment buildings, a hospital and a school were damaged by the shelling.

"Chaotic shelling has no other goal but to sow panic and fear among the civilian population," he said.

The Ukrainian attacks on the bridge in Kherson come as the bulk of the Russian forces are stuck in the fighting in Ukraine's eastern industrial heartland, where they have made slow gains in the face of ferocious Ukrainian resistance.

Russian forces kept up their artillery barrage in Donetsk province, targeting towns and villages, according to regional governor Pavlo Kyrylenko.

He said the region was without gas and power, and some areas also had their water supplies cut.

In Bakhmut, a Donetsk city on the front line of the Russian offensive, Russian shelling damaged a hotel and caused casualties, Kyrylenko said. A rescue operation was underway.

Amid Moscow's push to take full control of Donetsk and neighboring Luhansk province, which together make up a region known as the Donbas, the Russians have gained marginal ground northeast of Bakhmut, according to a Washington D.C.-based think tank.

The Institute for the Study of War said predicted that Russian forces were unlikely to occupy significant additional territory in Ukraine "before the early autumn."

Ukrainian President Volodymyr Zelenskyy claimed that Russia has lost nearly 40,000 soldiers during the war and that tens of thousands more were wounded and maimed.

His claim couldn't be independently verified.

The Russian military last reported its losses in March, when it said that 1,351 troops were killed in action and 3,825 were wounded.