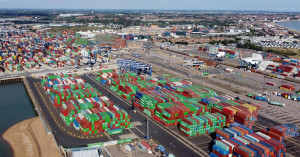 A view shows stacked shipping containers at the port of Felixstowe, Britain, October 13, 2021.

LONDON, July 28 (Reuters) - Staff at Britain's largest container port, Felixstowe, have voted in favour of strike action in a dispute over pay, the Unite union said on Thursday, warning of huge disruption across the supply chain.

The dockworkers join a growing wave of employees, in a range of sectors from rail to telecoms, resorting to industrial action as pay rises fail to keep pace with inflation which is expected to hit double digits in Britain by the end of the year.

"Strike action would bring Felixstowe to a standstill and would cause major logistical problems for maritime and road haulage transport entering the port," Unite said in a statement.

Unite said workers at Felixstowe Docks, which is operated by Hutchison Ports, had been offered a pay increase of 5%.

A port spokesperson said: "The company made what we believe to be a very fair offer and we are disappointed with the result of the ballot."

"We hope that any industrial action can be avoided," the spokesperson added, saying the union had agreed to a request to meet with the conciliation service ACAS next week.

The union did not give specific dates for the strike action, which will take place next month and was supported by 92% of workers who voted.

Earlier this month Unite said it was also balloting hundreds of dockworkers in Liverpool for possible strike action.