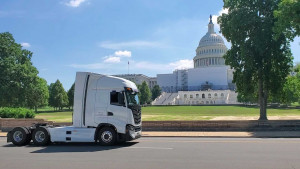 The intense hunt for 1.6 million unvoted Nikola stock proxies is unprecedented. Startup electric truck and battery maker Atlis Motor Vehicles is asking the Securities and Exchange Commission for its blessing to go public. And China will sell twice as many electric trucks as the U.S. this year, but the gap is closing.

Getting out the vote

Nikola's full-court press to get proxies voted in favor of raising the number of authorized company shares will come to a close at some point.

But it doesn't have to. Nothing in the company's bylaws limits how many times the startup electric truck and hydrogen fuel distributor can adjourn its annual meeting. What started on June 1 is now delayed until Aug.

2. Three adjournments is unprecedented, according to Jay Kesten, a Florida State law professor who specializes in corporate governance. A review of the drama so far:

Nikola asked shareholders at its annual meeting June 1 to approve increasing to 800 million the number of authorized shares the company could use to raise money.

It has only 33 million shares of its original 600 million authorized shares to sell or pledge for borrowing. Unlike other proposals at the virtual meeting that needed only a majority of proxies voted to pass, the share increase required 50% plus one of the total number of outstanding shares.

The trouble with Trevor

Indicted company founder Trevor Milton, who owns 11% of the company, voted his shares and a block of nearly 40 million shares he co-owns with CEO Mark Russell against the measure.  Shortsighted as it may be, Milton's stake would be diluted significantly when new shares are issued.

"I'd rather have 90% of a lot of money than 100% of a little money," Kesten told me. Proposal 2 initially received about 42% approval. Through painstaking and costly effort, the number is inching higher.

At last count on Monday, the favorable share count stood at more than 208 million.That is still 1.6 million shares -- about half a percentage point -- fewer than needed to pass. In a story earlier this week, Kesten said a proxy fight like this can cost £1.5 million. Nikola won't say how much it is spending.

But in addition to nearly daily entreaties, it has twice posted short videos of Russell pleading with shareholders to vote. This is the most recent. Even Chairman Steve Girsky cut a video seeking support. Despite the transparent outreach, which Kesten finds refreshing in corporate America, finding unvoted shares is getting hard.

Nikola says 105 million shares -- about 25% of all proxies -- remain unvoted. As it stands today, each of those is effectively a no vote. Nikola rounded up 5 million favorable votes between the second and third annual meeting adjournments.

That suggests that collecting fewer than 2 million more in two weeks should be easy. But it's not. Kesten suspects very few large blocks of unvoted proxies remain.

Nikola hired Alliance Advisors to chase down proxies. Only shareholders of record since April 2 are eligible to vote. That includes those who later sold their shares.

But finding folks who moved on is time-consuming and expensive. It could take a long time to get to 1.6 million counting by tens, hundreds and even thousands of share proxies. So, there is no definite answer to how long this could go on.

Why not ask Milton, whose federal fraud trial begins in New York Sept.

12, to switch some of his no votes to yes? Forget it. There's too much bad blood between him and the company.

Nikola still may have some flexibility to raise enough cash to cover the next 12 months of anticipated expenses, which is the company's goal. Nikola set aside tens of millions of shares for senior executives who gambled on taking a £1-a-year salary for three years against potential huge stock awards. Those awards are contingent on certain share price targets being met.

With a closing share price Thursday of £6.32, the first target of £25 a share is far away. And JPMorgan predicted Wednesday Nikola will try to raise money later this year.  Should Nikola ultimately put off the vote until next year, the voting rights on the co-owned Milton-Russell shares switch to Russell.

And he would vote for the measure.

With 20,000 shareholders who could become customers, startup electric vehicle and battery maker Atlis Motor Vehicles is seeking an audience of one -- the Securities and Exchange Commission -- to become a public company. Atlis eschewed going public in a merger with a special purpose acquisition company, and private equity wasn't interested. So founder Mark Hanchett went with crowdsourced funding but not like GoFundMe or Kickstarter.

Atlis is wrapping up what is effectively a fifth funding round through Regulation A, a federally approved program to help startups raise money. Hanchett also twice used Regulation CF to pull in cash. 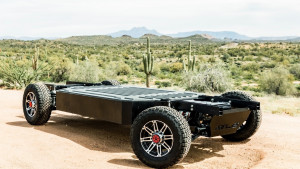 This week, Atlis asked the SEC to qualify its final Regulation A fundraising campaign before the company is publicly listed on the Nasdaq. The mini-initial public offering is priced at £27.50 per share, a far cry from the 29 cents a share Atlis asked in its first crowdfunding raise in 2018.

When the stock lists, the fortunate few who invested in Atlis can sell those 29-cent shares on the open market. If the listing falls a little, so what? It is still a nice windfall for those who trusted Hanchett's vision.

You can hear more on Hanchett's story during our fireside chat that is part of the FreightWaves virtual Supply Chain Meets FinTech Summit on Aug.

There is a caveat. Interact counts the Ford F-150 Lightning and the Tesla Cybertruck -- both expected to be primarily passenger vehicles -- in its estimates. China will continue to lead in medium- and heavy-duty electric trucks because it has a larger market for commercial vehicles.

The startup autonomous trucking software developer declined to say how many trucks Hegelmann reserved. TuSimple will update its reservation total during its second-quarter earnings call on Aug.

The biggest federal rebate of £200,000 is stackable with provincial grants available in Quebec and British Columbia.  The California Air Resources Board opened the second round of its Clean Off-Road Equipment Voucher Incentive Project (CORE) this week. CORE has £125 million administered by CalStart for point-of-sale incentives of up to £500,000 per voucher.

Mobile charging of electric trucks is becoming increasingly popular. Lightning eMotors showed off its second-generation high-speed charger on wheels that will be available late this year.

Its first model was good for up to 192 kilowatt hours of charging power. The new model offers between 105 and 420 kWh battery capacity, offering up to five DC fast-charging outputs. Xos Trucks and Nikola also offer mobile charging, the latter leveraging 350-kWh systems from Tritium. Lightning eMotors develops its own. 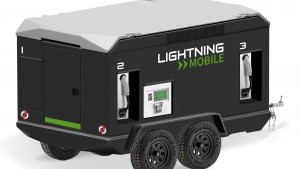 That's it for this week.

Sign up here to receive Truck Tech in your email on Fridays.