Are you a port trucker? We want to hear from you. Contact the World Socialist Web Site to tell us about your working conditions and what you're fighting for. All submissions will be kept anonymous. 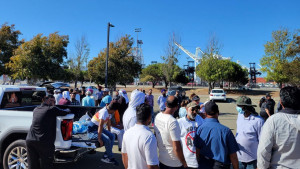 Protests continued Friday, July 22, by truck drivers against California Assembly Bill 5 (AB5), which threatens the legal status of tens of thousands of independent truckers across the state.

The drivers have been blockading the Port of Oakland to demand an exemption for owner-operator truckers in the bill, which would otherwise effectively bankrupt them through higher regulatory costs or force them to sell their trucks and become company drivers. Friday's protest, unlike previous days, did not block the docks, allowing operations to continue. Protesting truck drivers were threatened with arrest if the blockade persisted.

The Pacific Maritime Association (PMA), which operates the docks, set up a "Free Speech Zone" where the protest could carry on without disrupting operations. A trucker with two years of experience spoke with the World Socialist Web Site on conditions. "AB5 is going to put a lot of us out of business. We have spent a lot of money for this job, and it is like we are just going to throw that into the garbage and be forced to become drivers for major businesses.

"Before AB5, we had high diesel costs, issues of emissions, and buying new trucks. California has a lot of requirements, and it is already the worst state to be a trucker in with the 55 mile per hour speed limit. "We pay chassis companies up to £20,000.

And if I have a code for one company, say CMA but there are no CMA containers available, I am waiting with an empty container and paying hundreds of dollars a day. The customer will eventually reimburse, but we are paying upfront. If there are yard problems, we are paying £400 to £600 a month."

Another trucker spoke with the WSWS and explained why he joined the protests. "They are trying to ruin us with AB5. It will impact all of us." He continued by explaining the sacrifices made to become an owner/operator. "Well, the truck itself could be £200,000, and before you can get your own truck, you have to get your commercial license which is a 3- to 6-month course, and then you have to get work experience for a few years first."

An owner-operator who has worked since 2002 said, "AB5 will kick me out, and the big businesses will move in.

I can't compete as one guy, and they can communicate with the ports better. English is my second language so there is a barrier." A woman, who works for a trucking dispatch company, came out to support the truckers. "The law is unfair; it's detrimental to truckers.

The terminals also don't realize that truckers are going to quit or retire or move to a different state. It's a big slap in the face. "Truckers will have to try to become a limited liability corporation (LLC), become their own company, which has lots of added costs.

You need to set up an account with the shipping lines, you need to register with the NMFTA (National Motor Freight Traffic Association) and get a SCAC (Standard Carrier Alpha Code). And just to become an LLC costs an extra £300-£500 a month. Insurance prices are already so high, £800-£1,300 a month depending on your driving record.

Then you have your truck payments. "Some of these guys live out in Fresno, Lodi or Rohnert Park, hours away since they can't afford this area. They live in their trucks Monday through Thursday, go home on Friday and then get back to work on Sunday."

Since the start of the protest, dockworkers have expressed their solidarity with truck drivers, with at least 100 refusing to cross the picket lines, according to press reports. This spontaneous act of solidarity is also a demonstration of the deep frustration and anger at the International Longshore and Warehouse Union (ILWU), which is keeping more than 20,000 members across the West Coast on the job for more than three weeks since their contract expired July 1. Even though the Pacific Maritime Association is demanding significant concessions on automation and working hours, the ILWU has been working carefully behind closed doors with the PMA and the Biden administration to avert a work stoppage and enforce a sellout.

Last month, the union issued a joint statement with the PMA declaring that it had no intention of even preparing for a strike. The ILWU is clearly shaken by the protests, fearful that it will spread to the dockworkers and ruin its plans to bureaucratically suppress the class struggle on the docks. The union issued a statement essentially denouncing the truckers as selfish, attempting to drive a wedge between dockworkers and truckers.

"Every day, ILWU workers are getting up at 5 am to drive to the dispatch hall and fill jobs at the port," ILWU Local 10 President Farless Dailey III told CNBC. "But when they get to the terminals, the trucker protests are creating conditions which make it unsafe for workers to pass through the gates and do our jobs. ILWU workers want to work and move cargo, just like we have every day even during the worst days of the pandemic. We are in favor of AB5, not against it.

But we're not going to put our members in harm's way to pass through the line of truckers."

In addition to pitting dockworkers against truckers, the ILWU also helps divide dockworkers against each other by tier. The lowest tier "casuals" are not even union members and have no contractual rights, including the right to vote on the contract which determines their wages and working conditions. They are essentially day laborers who struggle to work more than a day or two each week in many instances.

They have to go on like this for over a decade before they get hired in as full timers. Dailey himself made nearly £200,000 in 2019 as the local Secretary Treasurer, and International President Willie Adams made £230,000 last year. Another trucker said, "A lot of them [the dockworkers] support us, but the union has stated they support AB5.

The Teamsters also want us [to be classified as employees] for the dues, but that is not how we want things to be." "We face all kinds of costs already. My truck is from 2008 and it only has a few months left because of rules around carbon emissions.

But it doesn't make sense to me since my truck can run in Nevada and that is just across the border." "It is the worst time for them to ask for AB5 for us. You see the wars and I think inflation is going up faster than ever.

You have companies laying people off. So, if we have to change jobs it is not really possible, and right now we want to work. I work 12 to 14 hours a day and I want to stay working."

Joe, a trucker with 18 years of experience, added, "The Democrats are hurting us. What gives Newsom the right to tell me what jobs I can or can't have? The politicians are pointing the finger at the Russians, but honestly, we need to look in the mirror.

We took land from the natives and never paid for it." Asked about next steps, one worker said, "We have to go all the way with this. If we go back to work then this week will be for nothing."

When asked about the move to stop their protest from blocking the ports "They had a meeting with some of our leaders and we were told if we go back and block the ports on Monday then they will start arresting people. But we have a strong motive to block the ports, that's how we can get officials involved, or the government to pay attention. If we stop working, then the ports will lose money."

After some discussion about the conditions at the docks and the situation facing dockworkers, he also added, "We are with them, and I hope they are with us. It is like we are all part of the same chain."

Make your voice heard! Tell us what your working conditions are like and what you are fighting for.

We will protect your anonymity.Related TopicsFind out more about these topics: