The last of the Mohicans… is a truck 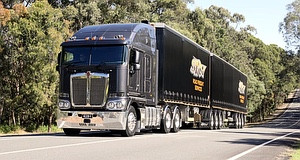 ALTHOUGH the era of vehicle manufacturing in Australia finally ended five years ago (although the industry still converts some imported vehicles from left- to right-hand drive for local consumption), Queensland truck engineering company Paccar is still manufacturing trucks in commercial numbers.

Its product, the Kenworth K-Series - the K220 in particular - is arguably the last remaining vehicle of any type that is still designed and manufactured in volume in Australia. To its credit, the local Paccar team has done an impressive job to elevate the K220 to a similar level as the best Europe can offer.

The irony is Paccar has not produced a cab for many years in the USA, although its European subsidiary, DAF, builds nothing else.

The desirable dimensions of the K-Series, for B Double applications, effectively breathed life into the cab-over and saved it from extinction in Australia. Suffice to say, truckies love it.

The rumour mill suggests Paccar's DAF cabin will be the longer-term future for a local cab-over Kenworth, but that idea will be kicked further down the road thanks to the introduction of revitalised K220.

Kenworth recently launched the "new" K220 at a grand event in Brisbane with more than 500 customers, dealers, industry associates and the media in attendance.

The K-Series has been a staple of the Kenworth range, particularly since B Doubles became a part of the Australian transport landscape - any trip up or down the Newell Highway would prove just how line-haul operations have embraced the cab-over.

The K220 is a huge step up from the K200 it replaces, providing better cab ergonomics, an advanced CANBUS electrical architecture, a new digital 'glass' cockpit instrument display, a quieter cab and a smoother ride quality, combined with improved steering.

All of that brings the "new" truck, if not in line with contemporary Euro cab overs, then very close to them.

It proves that we have the skills in this country to at least match those from overseas.

Our friends at Truck and Bus News had the chance to cast an eye over the new truck and to grab a brief drive of a couple of different variants, both with the latest Eaton Endurant 18-speed AMT and with the traditional RoadRanger 18-speed manual.

The Endurant, in particular, was superb and makes the AMT option the best option for anyone contemplating a new K220.

Truck and Bus News reported: "Paccar started development of the K220 back in 2018, battling through the hurdles of COVID and for all of that the company has done a pretty amazing job in creating the package they have."

"The truck Paccar has built enables them to still appeal to their traditional Kenworth audience, without alienating them with styling that is too revolutionary, but which delivers more creature comforts, better performance and much improved ergonomics," it reported.

With Truck and Bus News