The suspected driver of a truck where 53 migrants died from heat in Texas did not know that the air conditioner had stopped working, an informant says.

According to charging documents filed in federal court, Homero Zamorano did not know of the issue. Officials say he was found hiding near the truck.

The Texan is one of four people charged in the deadliest human trafficking incident in US history.

Several children found in the vehicle are still being treated in hospital.

In another development, another truck carrying migrants has been found in the same part of Texas.

Mr Zamorano, 45, and alleged conspirator Christian Martinez, 28, are accused of sending text messages to each other about the smuggling operation both before and after the truck was discovered in sweltering temperatures.

A confidential government informant working for Immigration and Customs Enforcement and Texas police told officials that the two had spoken after the deaths were reported.

Mr Martinez allegedly told the informant: "The driver was unaware the air conditioning unit stopped working and was the reason why the individuals died," according to court documents.

The documents add that the informant and Mr Martinez were standing within several metres of each other when the conversation with the driver took place.

Mr Zamorano was found hiding in bushes near the truck. Mexican officials say he initially tried to pass himself off as one of the survivors.

He was arrested when surveillance photos showed him driving the truck past a US Border Patrol checkpoint in Laredo, Texas, on Monday.

According to one Texas congressman, he was high on methamphetamine when he was caught.

Both men face the death penalty if found guilty of smuggling and conspiracy charges.

Two other men accused of being involved, Juan Claudio D'Luna-Mendez and Francisco D'Luna-Bilbao, have been charged with firearms possession and with being in the US illegally. Both are Mexican citizens.

Mexican authorities say a total of 67 migrants were inside the lorry, while prosecutors in San Antonio have put the number at 64.

On Friday, the Bexar County medical examiner's office said it had "conclusively identified" six of the 53 victims from Monday's incident.

In addition, 42 "potential identifications" have been made. Five remain unidentified.

The victims have so far included 27 Mexican citizens, as well as 14 Hondurans, seven Guatemalans and two Salvadorans.

Also on Friday, the Bexar County Sheriff's office began investigating an apparently abandoned 18-wheel truck found in a residential area just a few miles north of where the first vehicle was found.

About 13 migrants were found in the most recent truck, officials tell CBS, the BBC's partner in the US.

"Preliminarily, it appears no individuals have suffered any major injuries," the sheriff's office posted on Facebook, adding that more details would be released once they were available.

People-smuggling is a major industry along the US-Mexico border.

In May, a record 239,000 undocumented migrants were detained crossing into the country from Mexico.

Mass deaths of this kind have been uncovered on a number of occasions around the world in recent times.

Among the worst cases are: 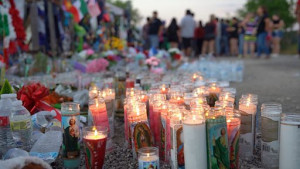 To play this content, please enable JavaScript, or try a different browser