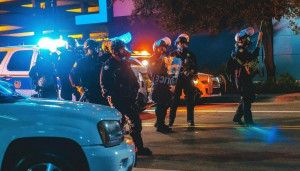 SKOPJE, North Macedonia (AP) -- Police in North Macedonia have found 86 migrants, including minors, crammed into a truck with an attached trailer in the southern part of the country and arrested the truck driver. The migrants from Pakistan, Syria and India were discovered late Saturday during a routine inspection near the border town of Gevgelija, police said Sunday. They did not give any other details about the migrants.

Police said a 44-year-old truck driver, identified only by his initials as D.M., was arrested. The migrants are believed to have entered illegally from Greece and were headed to Serbia and onto wealthier European countries. They have been transferred to a reception in Gevgelija, pending deportation to Greece.

If convicted of smuggling, the truck driver faces up to five years in prison. The relaxation of restrictions imposed during the COVID-19 pandemic has resulted in more migrants attempting to use the Balkan route into Europe. ___

Follow all AP stories on global migration at https://apnews.com/hub/migration.

(Disclaimer: This story is auto-generated from a syndicated feed; only the image & headline may have been reworked by www.republicworld.com)